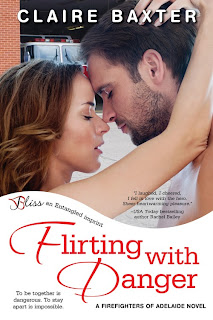 Flirting With Danger by Claire Baxter

To be together is dangerous. To stay apart is impossible.

Firefighter Jasmine Mackinnon has always just been one of the guys. So no one’s more shocked than she is to find herself kissing fellow firefighter and all-around sinfully handsome playboy Aaron Parkes after a friend’s wedding. Jasmine knows she can’t risk an emotional connection with a colleague—a potentially dangerous entanglement when fighting fires together—and nothing's more important to her than her job.

Aaron never noticed how beautiful Jasmine was until he saw her out of her firefighter duds, but there’s something about the fiery woman that tempts him. Though he knows pursuing a real relationship is out of the question for a serial dater like him, when their casual flirtation builds into something more serious, it's not just their jobs or their safety on the line. It's their hearts.

Claire Baxter writes contemporary romantic fiction of all lengths. Her short stories have been published in commercial women’s magazines around the world, while her novels have been translated into 20 languages, and have finalled in the Romance Writers of Australia's Romantic Book of the Year Award, the Booksellers’ Best Awards, the RT Book Reviews Reviewers’ Choice Awards, and the Cataromance Reviewers’ Choice Awards.

Before following her passion to write full-time, Claire was an award-winning corporate communications manager. Earlier, she worked as a translator and a PA.

Claire grew up in Warwickshire, England, but for more than 20 years has called Australia home. She considers herself lucky to live near one of Adelaide’s beautiful metropolitan beaches where she loves to walk and think up stories.

a Rafflecopter giveaway
Posted by Melody May at 2:22 AM