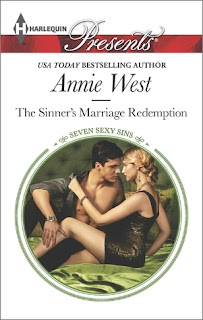 Okay, I finished The Sinner's Marriage Redemption by Annie West. I must that it's definitely an interesting plot. We have Flynn Marshall who grew up looking upon the Cavendish and being envious of the wealth they had. However, he never knew the cost it came. So, he used that envy to gain everything he had ever wanted. All he needs is that trophy wife, and he figure he had the perfect person, Ava Cavendish. Basically, he meticulously planned out his strategy. Poor Ava she doesn't have a clue he's up to. In her naiveté, she believes she is supporting her husband. Of course, things never go according to plan.

What I liked about the story:

Ava. I liked that she's sweet and trusting, but at the same time she doesn't want to served with a silver plater. She looks back her childhood and has no desire to relive that life again. However, Flynn doesn't have a clue. So, tries to give her everything that she has lost thinking that's what Ava needs. So, we see these two people aiming at two different goals, at the same time they are aiming to have different experiences from what they grew up with. I also liked that with each chapter I wonder if it was the chapter everything was going to fall apart for Flynn. Cause we Ava would get a feeling something wasn't right, but she would brush it aside.

Overall,  The Sinner's Marriage Redemption was a pretty good read. I like that both characters came to term of their past. It did start off a little slow at the first couple of chapters, but I started to get into the story I found myself saying one more chapter, and is this chapter that Ava finds out Flynn hiding the truth. So, if you are looking for a fairly quick read with lies and deception, but the hero  manages to realize what he was striving for is wrong, this might be the book for you.