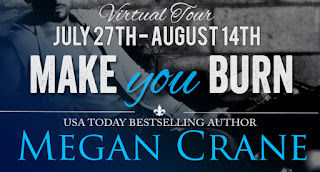 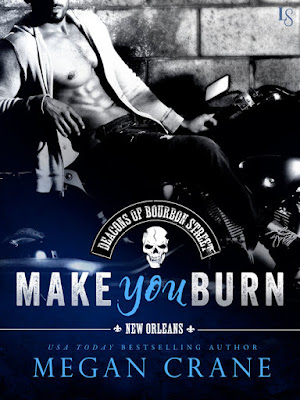 Blurb
Meet the Deacons of Bourbon Street, bad boy bikers who are hell on wheels—and heaven between the sheets. Megan Crane revs up an irresistible new series co-written with Rachael Johns, Jackie Ashenden, and Maisey Yates.

Sean “Ajax” Harding’s oaths are inked into his skin. Once second-in-command of the Deacons of Bourbon Street motorcycle club, he left New Orleans to protect the brotherhood, and only the death of his beloved mentor, Priest Lombard, could lure him back. Walking into the old hangout gives him a familiar thrill—especially when he gets an eyeful of the bar’s delectable new owner. A wild ride with her is just the welcome Ajax needs. Then he realizes that she’s Priest’s daughter, all grown up and totally off limits.

Sophie Lombard loved her father, not his lifestyle. She’s done with bikers . . . until Ajax roars into town—arrogant, tough, and sexy as ever. And although he treats her like the Catholic schoolgirl he once knew, Sophie’s daydreams tend to revolve around sin. With the very real possibility of heartbreak looming, Sophie knows better than to get too close to an outlaw. But every touch from Ajax is steamier than the Louisiana bayou—and heat like this may just be worth getting burned.

Megan Crane is a New Jersey native who had great plans to star on Broadway, preferably in Evita, just like Patti LuPone. Sadly, her inability to wow audiences with her singing voice required a back-up plan. Accordingly, she graduated from Vassar College and got her MA and PhD in literature from the University of York in England. She wrote her doctoral dissertation on AIDS literature, mostly so she could wallow in her obsession with the remarkable multimedia artist David Wojnarowicz and her idol, the bitter and hilarious David Feinberg. After many years in the rain and subject to the whim of seasons, she followed the sun to Los Angeles, where she lives with too many pets and an artist named Jeff. She is still plotting her Broadway debut.