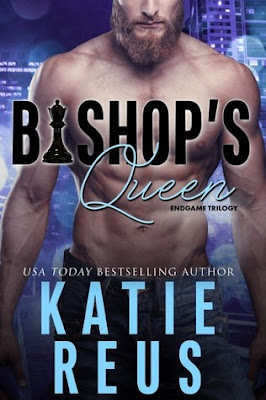 I finally got a chance to read Bishop's Queen. Oh my goodness this story was amazing once I was able to dive into the story. Okay in the previous book, we saw Evan and he wasn't doing too well. He basically broke off with Isla. He did it pretty callously.

Isla is ready to move on, even though she still loves Evan.  Evan knows he made a big mistake when he dropped Isla, but he's willing to win her back. He realizes that she might be endanger, and he hopes he can keep her safe.

Oh my goodness, I didn't expect Bishop's Queen to be so much better than Bishop's Knight. This story can be read as a standalone, but why would you. You find out things that happen in the first book, and I hope that we get the answer in the next book about the final Bishop. I wonder if they are all completely tied together in a weird coincidence. This story has build up and had me on the edge of my seat till the end. There were a couple of times I thought it was someone else than the person who was the bad guy of the story.

Rating:
5 Stars
Posted by Melody May at 9:51 AM No comments:

In TAMING MY WHISKEY…

Being the princess of the Dark Knights motorcycle club doesn’t come with a white knight or a fairy-tale castle, and that’s okay, because Dixie Whiskey has never needed a man to slay her dragons or make her whole. Even so, after watching each of her brothers fall in love, she’d sure like a shot at her own happily ever after. But with the Dark Knights watching over her and the only man she’s ever wanted out of reach, she’s not holding her breath.

As the launch of Silver-Stone Cycles’ biggest line approaches, Jace Stone is left needing a favor from the one woman who holds the power to take him to his knees. He knows when it comes to sinfully gorgeous and sharp-tongued Dixie Whiskey, he must stay on his toes and keep his walls firmly in place. But Jace needs her for his business—and Jace Stone always gets what he wants.

When the tall, gruff, and darkly handsome biker presents an opportunity that any other woman might see as the chance of a lifetime, Dixie turns him down flat. But Jace is determined, and he pulls out all the stops—sending Dixie’s overprotective brothers up in arms. Rebellious Dixie takes a stand—going after the freedom, and the man, she’s always wanted. One scorching kiss leads to an undeniable connection, but Jace isn’t looking to be tied down, and Dixie refuses to play second fiddle. Can two untamable hearts find forever love in each other’s arms?

I got a chance to read Carly Phillips latest release Sexy Dare. You can't go wrong with a Dare. When they find the right girl they will protect them to the end. Which brings us to Jason Dare and Faith Lancaster. Since there are a lot of Dares he's one of the New York Dare.

Anyway, Jason has no interest in getting into a long tern relationship. He swears off relationship, and we learn the reason why. He believes pretty strong about this even after meeting Faith. Yet his protective instincts kick in when he meets his curvaceous girl. Faith is adorable, and lovable, also she makes candy. She slowly whittle's down his wall.

Sexy Dare is a pretty fast read. Yet it packs heat quickly, and you want these two to get together. I love that Faith isn't a curvaceous and not a stick. I love that the cover even matches the description in the book. Jason loves the way she is. The ending comes quickly. I'm curious about how his business partners are going down, because they were just like Jason. It should be good.

Posted by Melody May at 9:18 AM No comments:

Wrapped Up in You by Jill Shalvis (Review) 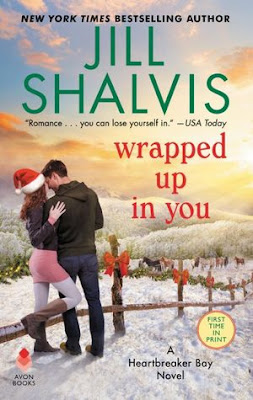 Let me start with I'm so excited Kel O'Donnell gets his own book. Some of you might be going, "Hey this is the first time we are seeing Kel." I would say you are wrong. We actually meet Kel in another series, and I felt that he needed his own book, but then that series ended. Yep, I was sad to see that happen. Yet, Jill was able to bring him to San Francisco and he gets his own story. YAY!!!!!!

Kel is definitely a sexy sherif in another series, and he's still sexy. It's been a while since I read that series, but I always felt needed to have a girl. I totally forgot that he had a few bad things happen to him. Anyway, he's kind of like damage goods emotionally. However, he's willing to take a chance on Ivy. Okay, Ivy owns the taco truck that everyone loves. She's been included into the group, but feels like an outsider. That's partly her fault. She continues to keep up a wall, because she's afraid they aren't going like her background. As the story goes on Kel starts to breakdown the walls and is slowly falling in love with the girl, and the say can be said about Ivy.

Anyway, the story seems like everything is going to be picture for these, but trouble seems to creep back into Ivy's life, and she's not sure what to do. Towards the end I felt bad for Ivy, because you get the full extent of her past courtesy of her brother. Which makes Kel doubt Ivy, but that stems from his past. I really thought this was going to be a sappy read that didn't have any real drama, but I had to wait for the drama. Drama is part of life, and it would have been a pretty dull story if there wasn't something that push these two apart and back together. I hope that we can get a story for Ivy's brother. I think that would be an interesting read. Maybe a spinoff, maybe not. Wrapped Up In You was a pretty good read.

Posted by Melody May at 7:51 AM No comments: