Seduced by the Spare Heir by Andrea Laurence (Review) 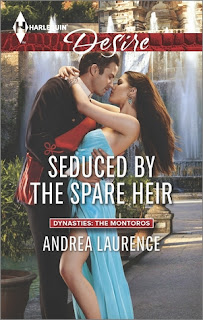 I basically spent most of the early morning (before the sun had the decency to grace us with its presence) reading Andrea Laurence's Seduced by the Spare Heir. I have to say that I enjoyed the story immensely, and it has me wanting to go back and read the other stories from the other authors that are part of this dynasty collection. Anyway, in Seduced by the Spare Heir we meet Gabriel Montoro (Gabe) who is about to have his world turn upside down. He is now forced to be come the King  of Alma after his father is no longer in line, because he didn't followed the correct procedure in a divorce and his brother abdicated the throne. Lucky him. Now he has change his playboy ways and he's going to need help. Fortunately, he knows someone who can help him, Serafia Espina. Now Serafia use to be a model, but her career was cut short due to health issues. Now she's teaches young ladies or whoever in need of help in decorum.

Yes, Gabe is selfish, but he's the second son and normally they live a life whatever goes. However, we learn that he used to follow the rules until an incident that happen which changed his attitude. I can't fault the guy for being a bit selfish and willing to do whatever he wants to get his way. Then we have Serafia who was working her way to the top of modeling when her heart gave out. She actually had to learn how live again. I liked how she helps Gabe to become the man his country needs. I liked the story. I actually, like how Andrea incorporated Serafia health problems to be anorexia. It's something you hear about, but we kind of gloss over because the thing that is talked about is obesity. Anorexia can be just as scary. I knew a guy who actually died of health complications due to anorexia when he was younger. I liked that Andrea was able to work issues into Gabe and Serafia. I did like that they weren't perfect, but looked on the outside. Looks can be deceiving.

Overall, Seduced by the Spare Heir is a pretty good story. I did enjoy how Gabe decided he needed to fix things with Serafia and make everything right. Like I said it makes me want to read the previous books in the series, and the future stories.