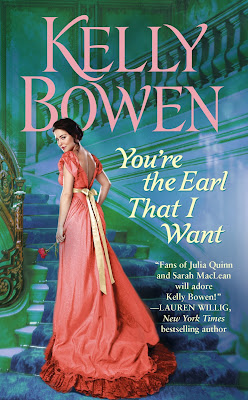 THE EARL DOTH PROTEST . . .
For businessman Heath Hextall, inheriting an earldom has been a damnable nuisance. The answer: find a well-bred, biddable woman to keep his life in order and observe the required social niceties. But it's always been clear that Lady Josephine Somerhall is not that woman. Once a shy slip of a girl, Joss is now brilliant, beautiful chaos in a ball gown. . . . BUT THE LADY KNOWS BEST
In her heart, Joss has always loved Heath, the one person she's always been able to count on. That doesn't mean she wants to marry him though. Without a husband, Joss can do as she pleases-and now, it pleases her to solve the mystery of an encoded file given to Heath by a dying man. It's put Heath in peril once, and Joss won't let that happen again. She'll do what she must to ensure the earl's safety. And to remind him that what she lacks in convention, she makes up for in passion.

Excerpt from You're the Earl I Want:


Joss watched him, wanting to smooth the troubled lines from his forehead. “I once knew a boy who told me, when he was grown up, he would become a pirate king and sail his own ship to the four corners of the world in search of treasure,” she said quietly.
His mouth twisted but his eyes remained hard. “That boy grew up. And discovered that there were no such things as pirate kings, and no time to search for treasure.”
“Yet that boy now owns his own ships.”
“He does.”
“And what stops him from sailing them where he pleases? What stops him from doing and taking what he truly wants?”
His eyes caught hers and held them trapped within their brilliant blue heat. The remoteness was gone, replaced by a sudden predatory hunger that made Joss swallow convulsively. Her breath stuttered, anticipation and desire roaring to life and sending frissons of longing pulsing through her. The question she’d flung at Heath was swirling around in her brain now, demanding an honest answer from her own conscience.
What was stopping her from taking what she truly wanted? Because what she wanted was standing before her in perfectly tailored evening clothes, his hands clenched around a pile of newspapers, looking at her with such raw covetousness that it was making her nearly drunk with a reckless want.
“Perhaps one day I’ll take you there,” she said into the sudden silence.
Heath stilled. “To Bombay?”
“To start.” She’d meant it to sound like a jest, but it came out as an invitation. “I could take you a lot of places.” Holy hell, but what was she doing?
Heath seemed to have stopped breathing, though he took a step closer, his scent enveloping her. Instantly her mouth went dry, and a steady throb built in her belly. She squirmed, but she was backed against the desk and had nowhere to go. Sanity was rapidly disintegrating around her, crumbling beneath an overwhelming ache to touch this man. To have him touch her.
“Of course I don’t have my own ships, so I’d have to hitch a ride on one of yours.” She barely recognized herself.
There were reasons why she shouldn’t do this, she knew. She just couldn’t think of one right now.
Heath’s expression shifted suddenly, as if something within him had given way. He took another half step closer, close enough that he was pressed against her skirts now, the hard steel of his legs nudging hers apart so that he dominated her space and trapped her against him. He dropped the newspaper carelessly and braced his hands on the edge of the desk on either side of her waist, bringing his lips a breath away from hers.
“Would you take me?” she whispered, and neither of them could pretend she was still talking about ships.
“Yes,” Heath rasped.
And then he kissed her.

Kelly Bowen grew up in Manitoba, Canada. She attended the University of Manitoba and earned a Master of Science degree in veterinary physiology and endocrinology.  But it was Kelly's infatuation with history and a weakness for a good love story that led her down the path of historical romance.  When she is not writing, she seizes every opportunity to explore ruins and battlefields. Currently, Kelly lives in Winnipeg with her husband and two boys, all of whom are wonderfully patient with the writing process.  Except, that is, when they need a goalie for street hockey.

a Rafflecopter giveaway
Posted by Melody May at 5:35 AM