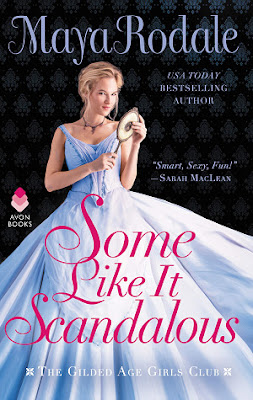 Where to beginning with Some Like It Scandalous? It was an interesting read. In someways it was a take on The Ugly Duckling, Daisy isn't the prettiest girl out of the Swan girls. However, Daisy doesn't rely on her looks, no she relies on her brains. Plus, she has a promising path set for her if she make it to spinsterhood. Yet, there's something lurking in the dark that her mother doesn't want to fully reveal yet she strongly urges Daisy to make a match with her archenemies Theodore Prescott the Third. A pretty boy with too much time on his hands and finds himself in a lot of trouble. His father basically tells him he needs to marry Daisy.

Gotta love when a pretty face meets a smart girl. However, Theodore has more brains than he lets on to believe. The more time they spend in their fake engagement, the more they realize they were completely wrong about each other.

Daisy has a beauty that society doesn't realize, and that's partly Theodore's fault. The name he came up with has stuck like glue, but Daisy doesn't let it faze her. When Theodore gets to know Daisy better, he realizes he did her a disservice all those years ago. Of course he wants to make amends for his action.

Maya Rodale has a wonderful story with Some Like It Scandalous. On the cover it has a quote from Sarah MacLean about being "Smart, Sexy, Fun!", and I think that's the best way to sum up the story. Daisy character is smart, and she doesn't realize she has a sexiness. When she matches wit with Theodore it's pretty fun. Even though she's the main brains of the operation, you would be surprised to find that Theodore has more brains that his pretty face lets on. Deep down he has a caring heart, even though he does come off a bit shallow at the beginning.