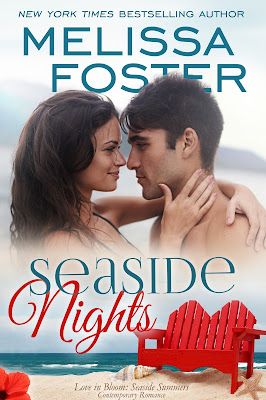 Sky Lacroux has finally realized her dream and opened her own tattoo shop in Provincetown, Massachusetts. She's happy as can be, preparing the shop for its grand opening and renting a cottage in the Seaside community while renovations to her new apartment are being completed. The only thing missing is the one thing she longs for, and has no control over--love.

Sawyer Bass, a professional boxer, plays his guitar at a local bar to escape the painful reality of his father's deteriorating health and a recent health warning of his own. But when he spots a stunning brunette across the room, escaping reality goes out the window, and the beautiful woman becomes the focus of his next song--and maybe even the rest of his life.

When Sawyer walks into Sky's tattoo shop and sees the woman from the bar--Sky--the chemistry between them is instant. Sawyer is everything Sky could ever hope for in a man. He's honest, loving, sensitive, and potently virile--but boxing goes against everything Sky believes in. The closer they become, the more she realizes that her alpha boxer is waging his own emotional battle--only the battle she thinks he's waging isn't the one that threatens to tear them apart.


I'm going to in a completely different direction with my review on Seaside Nights by Melissa Foster. Sometimes  a song or two will pop in my mind and I think, "man that totally works for this book". So, the two songs that came to my mind were Survivor's Eye of the Tiger and REO Speedwagon Can't Fight This Feeling.

Here's why these two popped up. Eye of the Tiger is an easy one, because Sawyer is a boxer and it's the perfect boxing song (thank you Rocky). He's hungry for a win. However, he's doing it make sure his parents are set for life. How sweet. Lets just offer up some ovaries for sacrifice here. If that didn't call for ovaries sacrifice, the poet/musician thing should. That's right ladies he sings and writes. Panty melting all the way. The more we get to know Sawyer the more we realize he's a keeper. *sigh*

Now Sky. I didn't know she was such a hippy. She loves poetry, art, and peaceful things.


Sky was a free spirit, and she'd learned over the years to love herself for who she was, rather than comparing herself to other.

She totally embraces herself, and I adore that about her.

We see that Sawyer can speak to her soul. At the same time she's trouble by his boxing. Throughout the story she's trying to get passed the notion of him fighting. For instance we see this early on:

No matter how great of a kisser he was, or how she felt like they'd connected on so many levels, he was still a fighter.

Huge issue between them. However, Sawyer doesn't push Sky to support him. At times she felt like she was being selfish. I love how Blue helps the guy out by saying:

It's a good story on that aspect. You have someone that is so perfect, but has one thing you don't like. Are you willing sacrifice almost perfection for one thing you don't like? This is a tough choice for Sky. You move pass the boxing, Sawyer is the perfect guy for Sky. Hey I would take Sawyer. He's just yummy and can totally melt you into a puddle of goo. Fortunately, Sky was able to realize she Can't Fight this Feeling  when it comes to Sawyer.

Overall, Seaside Nights keeps you entertain. You will see Sky and Sawyer hot and heavy. Trust me they are smoking hot, before they jump into bed. Once they do they tear up those sheets. You will laugh and you will get the feelies. Yes, you will get the antics of Bella and Theresa, and it seems to get worse (in a very fun way). This prank definitely tops the Bradley Cooper one. So, if you are looking for a getaway, you might consider Seaside Nights a try.

One last final thought before I end this: I liked how Melissa was able to work in the Parkinson, which Sawyer's father. It's a debilitating disease and very heart-breaking to family members. Yet, she was able to work into the story to give Sawyer the reason to fight for the money. It wasn't for fame and glory. Plus, it gave him an outlet, because it can be frustrating knowing you can't do anything for the one you love.


"Honey, there's no perspective when it comes to matters of the heart. If anyone knows that, I do."