Spotlight: On The Fly by Catherine Gayle 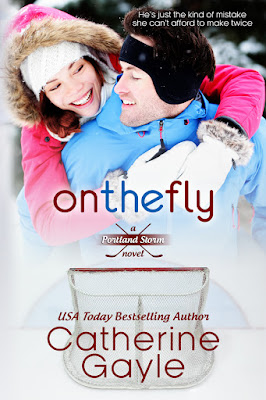 Injury after injury has put Brenden Campbell’s NHL career on hold for years. Now he’s playing for the Portland Storm and determined to make it stick. Few things in life drive him more than being told he can’t have something he wants, and what he wants most is to prove he belongs. Brenden also wants Rachel Shaw, the cute, little redhead who just got hired as the general manager’s new assistant. But then she went and made herself off-limits, telling him: “I don’t date.” Those three words pretty much guarantee that he’ll do everything he can to change her mind.

Rachel is changing things up on the fly for her family, moving them somewhere she can be the kind of mom her kids deserve. Allowing anyone else to be in their lives is out of the question, at least until her instincts get back on track. How else can she be sure who to steer the kids clear of? Right now she trusts no one, including herself, and especially not a man like Brenden Campbell. He’s way too handsome and a little bit cocky. Falling for a guy like him is a mistake she can’t afford to make twice.

Catherine Gayle is a USA Today bestselling author of Regency-set historical romance and contemporary hockey romance with a New Adult feel. She’s a transplanted Texan living in North Carolina with two extremely spoiled felines. In her spare time, she watches way too much hockey and reality TV, plans fun things to do for the Nephew Monster’s next visit, and performs experiments in the kitchen which are rarely toxic.
You can find out more on her website, her blog, at Red Door Reads, at Facebook, on Twitter, and at Goodreads. If you want to see some of her cats’ antics and possibly the occasional video update from Catherine, visit her YouTube account.


Have you read any of Catherine's books? If you have what were they? Or are you just a hockey romance enthusiast and needing to find a new series to find?
Posted by Melody May at 5:00 AM