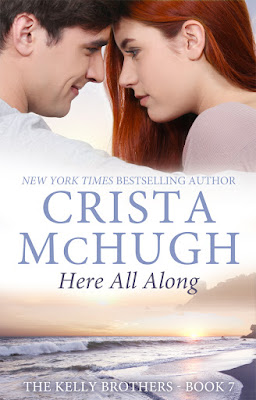 Blurb
Can best friends become lovers while the cameras are rolling?

Movie star Gideon Kelly has always harbored a secret crush for his long-time friend and assistant, Sarah. One sizzling kiss is enough to convince him she’s the only woman for him, and he’ll do anything to prove to her they have all the makings of an epic Hollywood romance.

Sarah Holtz rose to stardom as a child only to crash and burn in her late teen years. Gideon was there to help put the pieces of her life back together, and she now relishes her life far away from the paparazzi flashes. Her need for privacy is the one thing holding her back from exploring something more with him. When a video of their kiss goes viral, she’s left wondering if he’s worth the risk of stepping back into the spotlight to become his leading lady.

My Thoughts:
Okay, I found Here All Along to be a sweet romance. Here's why:

We have Gideon who has been in love with his best friend for sometime, and he would love to see it progress. However, Sarah (Red) doesn't want to ruin their friendship. Also she's his personal assistant. Basically, Gideon would do anything to have at the more than friends level. While in Vegas he has Gabe kind of talk him to letting him help win Sarah over to his court.

Truly a sweet story about two friends that love one another, but afraid to move from the friend zone to lovers. It's scary transition, after all what happens if the relationship sours. Eek, no more of anything. We see Gideon taking his sweet time with the situation, but moves a little quicker when Gabe enters the picture. Actually, Gabe is like the catalyst to it all. In some ways it's good, and others it's like he needs to be smacked upside the head. We also have Sarah who has been picking up the pieces of her life after it spiral out of control. She even has a plan called Operation Independence. She wants to feel like she has her life in order before pursuing a relationship with Gideon.

Okay, there are somethings I wish were part of the story: For instance I think it would have been helpful to have a prologue of what happen prior or the night of the accident. However, this just my thought. I kind of wish that she didn't fall off the wagon, and handle the situation a little better than she did. Then again some of the things that happen in the story might not have worked as well.

Overall, Here All Along was a pretty good story. We have friends to lovers, overcoming the past, and happy ending. However, I did like when Gideon punched Gabe. Seriously, it had to be done. So, if you are looking for a feel good story, you might consider Here All Along.

Excerpt from Here All Along:

“What’s wrong, Red?”
“What makes you think anything’s wrong?” she asked without looking at him.
“You only eat yellow M&Ms when you’re upset.”
She snapped her head up and stared at him. “You were out late last night.”
“I was dancing.” He rose from the mat and rolled it up. “I’m allowed to have fun, aren’t I? Or is that not on my schedule?”
The slight flare of her nostrils let him know he’d pushed her buttons, but she didn’t say anything.
“Don’t worry, Red, I’m still a mass of sexual frustration.”
That earned him the stink-eye. She tucked her mat under her arm and went back into the villa.
And he was stupid to follow her, even after she’d made it clear she was pissed at him. “Red?”
She spun around so quickly, he collided with her. His arms reflexively reached to steady her, and before he could stop himself, he’d pulled her against him.
The next few seconds pulsated with a mix of fear, attraction, and frustration. Her eyes widened, and her hands pressed against his chest. But she didn’t push him away. At least, not at first. Her bottom lip trembled, and her gaze wavered between his eyes and his mouth. Then, as though she’d managed to put her shields back into place, she closed her eyes and wiggled free from him.
Damn it! One day, she’d give into temptation. One day, she’d give him permission to prove how good they’d be together. One day, he’d be free to tell her the contents of his heart.
But until then, he had to be patient and wait for the sign that she’d be open to it all.
“Did you tell Gabe who I was?”
“What do you mean?”
She rubbed her arm and kicked at the stairs leading back into the villa. “He called me Sage last night.”
That motherfu—
Gideon dug his hands into his palms to keep from blurting out the vicious words streaming through his mind. Practical jokes, he could handle. One-upmanship was part of the acting game. But he refused to stand back while Gabe harassed Sarah. “I’ll have a talk with him when I arrive on the set.”
“No, please, don’t make a big deal about it.”
“But it obviously upset you.” He tilted her chin up until she was looking at him. “Or was there another reason why all the yellow M&Ms were missing?”
“Just be discreet. I like my life the way it is now.”
“So I’m not in danger of losing my favorite assistant?”
She covered his hand with her own and pulled it away from her chin. “Not unless I discover Mackinzie Donavan in your bed.”
The acid in her voice told him she knew about his escapades last night. “We just went dancing. Scout’s honor.”
“Then you don’t want to see what ended up on the Internet last night.” She turned and strolled back into the villa with a gentle reminder. “You’re the one who doesn’t want to give Donna Carlson anything to use against you.”
Shit!
He raked his fingers through his hair and gathered up his yoga mat. By the time he went inside, she’d already disappeared into her room, so he sidetracked to the computer station Jason and Raul had set up. “What’s this about pictures of me from last night being on the web?”
Jason typed in a few words and flipped the screen around to show him.
He stared at the picture of Mackinzie straddling his lap and kissing him. The drunken nausea from last night made an encore appearance.
Jesus, I’m in hot water. 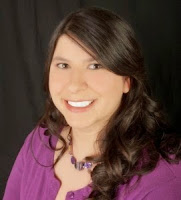 Crista McHugh, New York Times and USA Today Bestselling author of fantasy and romance who writes heroines who are smart, sexy and anything but ordinary. She currently lives in the Audi-filled suburbs of Seattle with her husband and two children, maintaining her alter ego of mild-mannered physician by day while she continues to pursue writing on nights and weekends.
She is an active member of the Romance Writers of America (including the Greater Seattle Chapter and the Seattle Eastside Chapters), and Romance Divas.
Just for laughs, here are some of the jobs she’s had in the past to pay the bills: barista, bartender, sommelier, stagehand, actress, morgue attendant, and autopsy assistant.
And she’s also a recovering LARPer. (She blames it on her crazy college days)