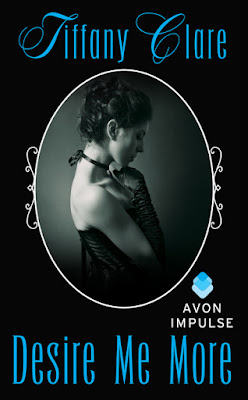 He was her lover…and her employer.

From the moment Amelia Grant accepted the position of secretary to Nicholas Riley, London's most notorious businessman, she knew her life would be changed forever. For Nick didn't want just her secretarial skills…he wanted her complete surrender. And she was more than willing to give it to him, spending night after night in delicious sin. As the devastatingly insatiable Nick teaches her the ways of forbidden desire, Amelia begins to dream of a future together…

But in the light of day, sinister shadows lurk, determined to tear them apart.

Okay, Desire Me More isn't a story you can pop into in the middle, because will be picking up pretty much where the first part ended. We are pressing forward and there is no looking back. At the end of Desire Me Now, we have Amelia's brother popping in towards the end causing problems and (spoiler) he ends up dead at the beginning of the story. I'm not going to lie, I didn't believe he was dead for a while. Anyway, we have the building of Nick and Amelia's relationship. However, Nick's past starts to make its way into the story. The past starts to threaten Amelia and Nick's relationship in a couple of ways, and causes a bit of a rift between the two. Part of the problem is Nick doesn't want to share his past with Amelia, but I think it's more the shame that is associated with it. The shame threatens the unity. That's not the only thing that threatens them, but guy from Nick's past, Shauley. We get a sinister from him, but we don't know the extent until the story develops.

I liked this part a little more, because we have danger that is lurking. Yet, we don't fully understand the extent. Nick starts to reveal his past and we start to understand why he's out for vengeance on a particular character that we have yet to see. Again we are left hanging on what's going to happen next. Yes, we get answer to somethings, but on the same token we have more questions popping up. We see Nick and Amelia's relationship progressing. Even though we are left hanging on a cliff, we do see a change in Nick that no one expect to happen. He's a pretty decent guy, even with his ruthless tendency. I'm curious how are they going to get their happy ever after, and I also would like to see justice dealt.

Deciding that life had far more to offer than a nine to five job, bickering children and housework of any kind (unless she’s on a deadline when everything is magically spotless), TIFFANY CLARE opened up her laptop to write stories she could get lost in. Tiffany writes sexy historical romances set in the Victorian era. She lives in Toronto with her husband, two kids and two dogs and you can find out more about her and her books at www.tiffanyclare.com