The Duke and I by Julia Quinn (Review) 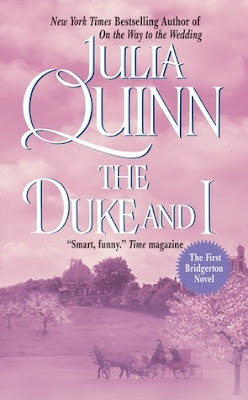 I decided to try out the Bridgerton series, since it has been popular on Netflix. Now have I watch the series, no. I tried, but I couldn't get into it. Shocker. However, I had no problem diving into reading The Duke and I. Instead of joining everyone on watching Bridgerton, I have decided to dive into what started that Netflix series. Granted my late to this part, it's fine. The funny thing is I have most of these books, and I had to only purchase a couple more books. Let's dive into the first book, The Duke and I.
In this story we get to know Daphne Bridgerton and Simon Basset, the Duke of Hastings. By the way Simon is friends with Anthony who happens to be the older brother, I love that Bridgertons are protective of one another. However, Daphne and Simon cook up this grand idea of pretending to court one another. Simon stays off the marriage mart and Daphne might have more opportunity for suitors. We know how well that goes. Nothing like a fake courtship to stir things up.
Anyway, I'm a fan of fake courtships. I enjoyed the story. I liked how Daphne was accepting of Simon and his issues. She was very understanding. I guess growing up with a gaggle of siblings it becomes second nature. I didn't mind Simon, and his quirks. I mean I would avoid marriage if my father was a POS. I would totally let the line die. I appreciate that Daphne was able to find herself when her husband was being a douche. Overall, pretty good book to me. Since most of you have read this, and I'm a little late to the game.
Purchase this when it was on sale a long time ago.
Rating:
4 Stars
Posted by Melody May at 9:34 AM No comments: