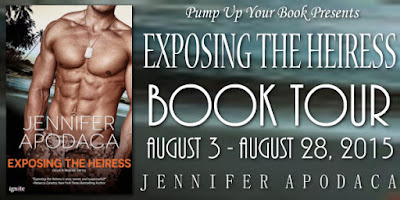 This Marine will protect her at all costs...

When wealthy heiress Alyssa Brooks finds out her stepfather has been paying her fiancé to marry her, she's humiliated and betrayed. She quickly breaks the engagement, only to be blackmailed by her now ex-fiancé, who threatens both Alyssa and the son she gave up for adoption. With nowhere to go, she turns to the one man she can trust.

Former Marine sniper Hunter Reece's lethal skills could save Alyssa's life. But his little sister's best friend has turned into a woman, who is an irresistible mix of secrets and sexiness. And while Hunter can trust himself to protect her, he can't trust himself to keep his attraction hidden...or even pretend to be the man that Alyssa remembers.

Because the only way to keep the lovely heiress safe is to become the one thing he knows she could never love...a killer.

My Thoughts:
I must be on a runaway bride theme, because this is the second book I have read that had that theme. Okay, we have Alyssa like some brides have pre-wedding jitters. However, she has been ignoring the nagging feeling, and her friend/assistant is like "Dude just call off the wedding." Of course, she doesn't until she overhears something that just isn't right. Like the fact the Nate is getting paid to marry her. Yep, pretty jacked up, and she tries to break it off with him and he goes all psycho. Yes, Alyssa needs to escape and she calls in the favor to Hunter, her best friends brother and long time crush. This is the gist of the story, and they are trying to figure out why Nate wants to marry Alyssa so bad.

I think this story needs to be broken down to two parts of focus, if that makes any sense. We have the relationship between Alyssa and Hunter, and the threat Nate is causing to get his way. We need both in order for the story to be really pulled off. Take one away and you are left with a dull story. Basically, we see the budding romance between these two while Nate is being a terror. Alyssa is all for getting with Hunter, because she's had the hots for him forever. However, Hunter is dealing with his own demons and he doesn't know if he can handle being a normal person. Seriously, being normal is overrated. As they get closer, something happens that triggers Hunter to pull away. He has a fear that he will go on sniper mode and scared Alyssa away. At the same time we have Nate, making threats to get his way, and he's willing do whatever to get his way. Clearly a sociopath. You don't find out why he's doing all this till the end. It makes total sense in a nonsensical way.

Overall, I enjoyed Exposing The Heiress. I did like the relationship between Hunter and Alyssa. I like that Hunter try to put his feelings on hold to try to protect Alyssa. You get to see Alyssa painted as this princess who does whatever she wants, while the truth she's pretty selfless. Plus, you get to see a slimy bastard getting taken down.

Award winning author Jennifer Apodaca grew up in Southern California and met her very own hero at the dog pound. She worked there, he came in on business, and it was puppy love. They married and had three wonderful sons.

While her husband worked on his master’s degree, Jen did the mom thing by day and went to college at night with the intention of pursuing a marketing degree. But her true passion was writing. With time at a premium, she had to make a choice.
Choosing writing, and with the full support of her husband, she poured herself into her dream. A mere eight years later, she published her first book DATING CAN BE MURDER. In her career, Jen has written a fun and sexy mystery series and a variety of contemporary romances. Taking the pen name of Jennifer Lyon, she also created a dark, sizzling paranormal series, and most recently, The Plus One Chronicles, an emotional and sexy adult contemporary series.

Jen has achieved many of her dreams except for attaining a self-cleaning house, a latte delivery service, and finding the holy grail of nonfattening wine and chocolate. She can live with those disappointments as long as she can keep writing the stories she loves to share with readers.