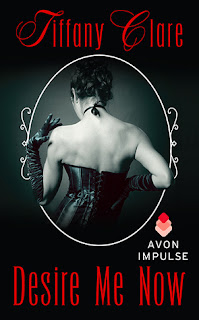 In Desire Me Now, we meet Amelia Grant and Nicholas Riley. Basically, Amelia is running away from her previous life. We don't know why until a little later in the story. She's had a run of bad luck up until she meets Nick. Basically, comes in rescuing Amelia. Her experience with men in general hasn't been too good, so she is a leery on Nick intentions. When Nick rescues Amelia he sees two things: 1) A wounded soul 2) A desire to have this woman. He needs to gain her trust.

First off, Desire Me Now starts out a little slow, and I think part of that stems from Nick trying to gain Amelia's trust. It takes majority of this story to gain that trust. We watch Nick showing that he's a trust worthy guy. There are few times Amelia is afraid that he's going to control her and Nick had to basically break it down for her:


"I might be master of this household, but I am not a master over any person, including you."

He basically letting her know I'm not going to force you to be with me.


"You will come to me of your own free will and on equal footing, Amelia. I won't have you any other way."

He is sure of himself.

Yes, we see the beginnings of their relationship. There is more to the story like the past she's running away from which happens to be her brother. Yes, it abruptly stops with a cliffhanger. However, it's a serial. The ending of this part leaves you wonder what's going to happen, since her brother has popped into picture. Is he going to cause trouble for Amelia and Nick? I guess we have to wait and see.