BLUE BLOODED
by SHELLY BELL
Where Rachel discovers more than just her kinky side. Will she and Logan fight off their attraction while trying to prove their innocence? 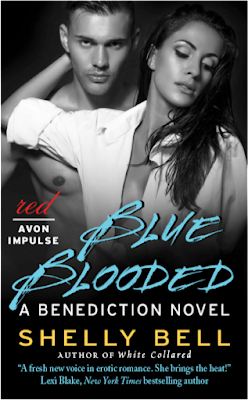 A woman who refuses to be tied down...

A Dom who's determined to bind her to him...

Framed for a crime they didn’t commit and hunted by corrupt FBI agents, they flee. As Rachel and Logan search for evidence to clear their names, the attraction they’ve been fighting ignites into fiery passion. Love is the last thing Rachel wants, but night by night, as Logan binds her body, he unravels the knots around her heart. And when they uncover a shocking political conspiracy, Rachel will stop at nothing to reveal the truth…and it just might kill her.

She began writing upon the insistence of her husband who dragged her to the store and bought her a laptop. When she’s not working her day job, taking care of her family, or writing, you’ll find her reading the latest smutty romance.

What are your thoughts on the cover? I like it, a lot. I especially like his intense stare. How about you, does this cover draw you in?