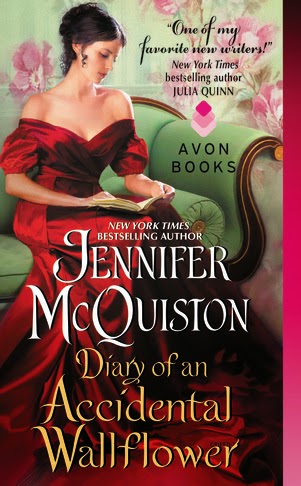 Blurb
Pretty and popular, Miss Clare Westmore knows exactly what (or rather, who) she wants: the next Duke of Harrington. But when she twists her ankle on the eve of the Season’s most touted event, Clare is left standing in the wallflower line watching her best friend dance away with her duke.

Dr. Daniel Merial is tempted to deliver more than a diagnosis to London’s most unlikely wallflower, but he doesn’t have time for distractions, even one so delectable. Besides, she’s clearly got her sights on more promising prey. So why can’t he stop thinking about her?

All Clare wants to do is return to the dance floor. But as her former friends try to knock her permanently out of place, she realizes with horror she is falling for her doctor instead her duke. When her ankle finally heals and she faces her old life again, will she throw herself back into the game?

Or will her time in the wallflower line have given her a glimpse of who she was really meant to be?


I have found that Jennifer McQuiston's stories are smart and funny. So, we have Clare who is entering her second season and she has set her cap on Alban. However, she has an accident which causes her to be out for a couple of weeks. So, enters our rugged handsome doctor, Daniel Merial. The interaction between these two is fantastic. You see Clare and Daniel at each others throats, and they slowly ease into a fun banter. They are just adorable together. Clare starts to question why she wants Alban. Actually, she starts to question what she enjoys about society.

Diary of an Accidental Wallflower is an entertaining story about the perils of young woman's season, especially when she starts to see the cracks. I enjoyed Clare's character, because I could relate to her. It's amazing how well I could relate her, because she has these "so-called" friends who basically were trying to knock her down. I had a similar situation in high school, but that's a story for another day; back to Clare. Clare takes her roll as the oldest seriously, and she tries to steer her siblings even though they don't want it. When Daniel enters the picture, he actually shows interest and cares for her siblings. He totally melted my heart on his compassion. The witty banter between Clare and Daniel is phenomenal, because they have such respect for one another. I like how Clare changes in the story, because when she started her season she started to lose her identity. Yet Daniel was able to help her rediscover her true self.

Yes, you will find a fun, witty, entertaining story in Diary of an Accidental Wallflower. Not only that you will also find some twist and turns you wouldn't expect. Plus, it has a perfect blend of interesting characters. Looking for fun story that have you entertain, you might give this story a try.

A veterinarian and infectious disease researcher by training, Jennifer McQuiston has always preferred reading romance to scientific textbooks. She resides in Atlanta, Georgia with her husband, their two girls, and an odd assortment of pets, including the pony she promised her children if mommy ever got a book deal. Jennifer can be reached via her website at www.jenmcquiston.com  or followed on Twitter @jenmcqwrites