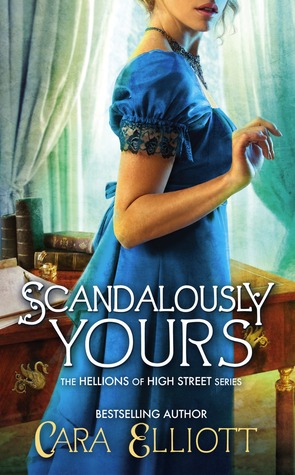 The eldest of the three Sloane sisters, Olivia is unafraid to question the boundaries of Society-even if it does frequently land her in trouble. Disdaining the glittery world of balls and courtship, Olivia prefers to spend her time writing fiery political essays under a pseudonym for London's leading newspaper. But when her columns attract the attention of the oh-so-proper Earl of Wrexham, Olivia suddenly finds herself dancing on the razor's edge of scandal. With the help of her sisters, she tries to stay one step ahead of trouble . . .

However, after a series of madcap misadventures, Wrexham, a former military hero who is fighting for social reform in Parliament, discovers Olivia's secret. To her surprise, he proposes a temporary alliance to help win passage of his bill. Passion flares between them, but when a political enemy kidnaps the earl's young son, they must make some dangerous decisions . . . and trust that love will conquer all.

The first thing that popped in my mind by the time I finished the story was unique. Yes, the heroine is a bit of a blue-stock, but so are her sisters. Normally, you just find one young woman in the family whose a bit of a blue-stock instead of all the sisters. However, they are vary of degrees of blue-stocking. In Cara Elliott's Scandalously Yours, we focus more on the eldest, Olivia Sloane, who is considered odd by the ton. She goes out of her way to be different, because she doesn't care what society really thinks of her. While her ideas would be a bit off the wall, this charming young lady holds some secrets.

Then we meet the Earl of Wrexham, who would be consider a stick in the mud. He's on the hunt to find the perfect countess, after all he has a young boy at home who is in need of a mother. So, he's trying find the perfect woman among the "simpering featherhead" young ladies. Of course, he believes he has  found a likely candidate in Lady Serena, yet his son, Prescott would disagree. Nope he sees her as Lady Steel Corsets. So, Prescott sets out to find the perfect match for his father. Oh dear.

Cara Elliott started writing Western novels at the age of five. However, she traded in her cowboy boots for Regency high-top Hessians after reading Pride and Prejudice in junior high school and hasn't looked back. She graduated from Yale University, and she now lives and works in New York City.

Excerpt for Scandalously Yours:

“How dare you spy on me, sir!” demanded Olivia, once she had mastered her emotions enough to speak.
He fixed her with a commanding stare, the one that had set many a seasoned soldiers to quaking in their boots. “I would not have had to resort to such tactics if you had shown me the courtesy of answering my letters.”
Olivia refused to be intimidated. Lifting her chin, she scowled back at him. “I did answer them.”
“With a single word—no.”
“And what,” she asked with excruciating politeness, “did you not understand about such a simple syllable?”
John couldn’t help but admire her grit. It took courage and resourcefulness to play in a man’s world. And she played well, he conceded.
Expelling a harried sigh, he felt his anger dissipate just as quickly as it had come. She had no choice but to guard her secret very carefully. “Look, at least hear me out, Miss Sloane. Tracking down The Beacon has led me on a merry dance throughout Town.”
Olivia paled at the mention of the nom de plume. Turning abruptly, she plunged off the path and darted around a tangle of holly.
“Wait!” John ducked under the prickly branches, losing his hat in the process.
“Go away!” Her voice was muffled by the overhanging leaves.
“Not until we talk!”
“I’ve nothing to say to you.”
The Devil take it. All but a last little flutter of her skirts disappeared behind a shaggy yew hedge. Swearing under his breath, John cut through a patch of lavender. He hadn’t come this far to be rebuffed. She would damn well listen. Or else…
Several long strides brought him within arm’s reach of her. “Confound it, Miss Sloane, stop and listen,” he called, lunging for her sleeve.
As his fingers seized the fabric, his boot snagged on a twist of morning glory. Pitched off-balance, he stumbled and fell, taking her with him. Tangled together, they hit the ground hard, their momentum rolling them into a patch of pachysandra.
“Ooof!” Olivia’s flailing kick caught him square in the shin.
Flat on his back, John got a momentary glimpse of Olivia’s irrepressible curls dancing in the breeze before another half turn landed him on his stomach. Burning with embarrassment, he tried to right himself, only to find that she was sprawled across his…posterior.
Bloody hell, he had never felt like a bigger arse in all his life.
They both started wriggling at the same time. He managed to twist face-up just as she slipped on the glossy leaves and fell back down atop him.
“Miss Sloane,” he gasped.
“Lord Wrexham,” wheezed Olivia, an odd little burr roughening her already throaty voice.
For an instant, he feared she was going to burst into tears.
Instead, she began to laugh.
And laugh.
Scottie was right. It was a delightful sound, its top notes shaded with a rich, sensual echo that seemed to stroke over his skin like a moon-dappled midnight breeze.
A twitch tugged at his lips. His dignity—as well as his coat—was in tatters, his pride was bruised, and though he should not find it at all funny, John felt a rumble vibrate deep in his throat.
Olivia tried to get up again, but her limbs were too weak with mirth. “Good Lord, what a ridiculous picture we must make!” she wheezed in between burbles of laughter.
“Here, let me help you.” Levering to his feet, John lifted her up and as she seemed a bit shaky, he kept his hands on her waist.
“Well, it’s not every day I take a tumble in the hay with an earl,” she quipped.
“Please don’t think that I make a habit of ruining a young lady’s reputation,” he answered.
Her cheeks, already pink from the breeze, turned a lusher shade of red as she looked up and wet her lips.
John felt his body clench. His legendary sang froid began to bubble…His steely self-control went up in smoke…
Olivia flinched as his mouth possessed hers. She was like summer rain against his tongue. So soft, so sweet.
Her hands came up around his neck.
Hell, it would serve him right if she throttled him on the spot.
But then, all of a sudden, she was kissing him back.
In a daze, John twisted around and braced her back against the ivy-covered wall, the glossy leaves crackling under the crush of silk. He was dimly aware of a roaring like cannonfire in his ears, and as his hands slid down to cup her breasts he realized it was the pounding of his own heart.
Knocking all reason to flinders.
A gust of air ruffled his hair, stirring wild, wicked thoughts of her waltzing naked through the trees. In response, his own privy parts began dancing to their own drummer. Thump. Thump. Thump. His pulse was pounding a military tattoo, commanding all soldiers to stand erect.
And Dear God, his Major Organ was responding with unabashed enthusiasm.
Olivia didn’t seem disgusted by his display of primitive lust. With a tiny moan, she tightened her hold and hitched her hips into him.
Lud, it felt good. No, better than good.
Exquisite.

Giveaway:
A digital copy of Scandalous Yours

a Rafflecopter giveaway
Posted by Melody May at 2:49 AM