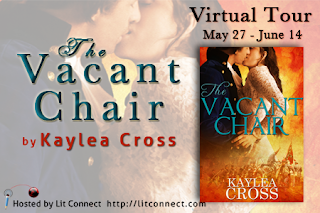 I would like y'all to welcome the author of The Vacant Chair Kaylea Cross to What I'm Reading.

First off, what made you decided to write a historical romance novel?
Well, I started a Civil War romance when I was fourteen and have always wanted to go back and finish it. When I started writing seriously and became published, I needed a break from my military romantic suspense books for a bit, so I decided to re-write my Civil War story. I’m so glad I did! I put so much work into the research and story development for it, I knew I couldn’t let it sit there on my hard drive gathering dust.

Have you always wanted to write a historical romance?
Yes, ever since I decided to write romance in my teens. The Civil War is so important to me, and I want to teach my readers about the part of the war I studied during my research for the book.

What inspired you to write The Vacant Chair?
I think it was a combination of Heather Graham’s Civil War books (especially the trilogy with One Wore Blue, One Wore Gray, and One Rode West) and Ken Burns’s documentary series, The Civil War. At that time, I was totally obsessed with the Civil War, especially the cavalry and the medicine of the era. In The Vacant Chair, I’ve written a story that combines both of those loves.

Out of all the books, do you have one that stands out the most and why?
This one, because it was the first novel I’d ever attempted to write. Kind of like my first child, in a way. I put a ton of work into the research for this one, reading more than a dozen primary source books and making my hubby accompany me back to Virginia to visit the battlefields I included in the book. We were only dating at the time, and then he surprised me by getting down on one knee in the middle of the battlefield and proposing! To me that was the most romantic gesture of all time.

So yeah, The Vacant Chair means a lot to me on many different levels.

What’s so special about your characters?
My heroine, Brianna, has a fire burning inside her. She’s determined to do what she can to heal or at least ease the suffering of the Union soldiers who come into her care at the hospital, having lost her husband early in the war.
The hero, Justin,

Do you plan to write more historical romance novels?

I don’t have any plans at this time, but I’ve left the door open to write another book connected to The Vacant Chair at some point in the future if I choose, featuring Brianna’s brother.

If you had to write your own life story, what would your title be?
Stranger Than Fiction (it’s true, ask any of my friends).

Final question, what makes The Vacant Chair a worthwhile read?
I think the story is very poignant, and the characters very strong. And oh, the things you’ll learn! I’ve packed so much into this story, and I hope it comes to life for my readers. The Civil War was a long, ugly chapter in American history and it’s important for us to understand and remember what people went through during it.

The Civil War has torn Brianna Taylor’s family apart and made her a widow. Determined to ease the suffering of the wounded crowding the Union hospitals and honor the memory of the man she loved, she embarks on a career as a nurse. But then he arrives—a patient who makes her feel alive again in spite of her resolve to stay detached.

Captain Justin Thompson understands the cost of war all too well, yet he felt compelled to fight for the Union his father died defending. Wounded at Cold Harbor and left to die at a military hospital, he owes his life to Brianna, who seems determined to guard her professional boundaries despite his best efforts to breach them. Just as he’s winning the battle for her heart, he’s forced to return to the front of a cruel war that could very well separate them forever.


Grab Your Copy of THE VACANT CHAIR at:

Kaylea Cross writes edge-of-your-seat military romantic suspense. Her work has won many awards and has been nominated for both the Daphne du Maurier and the National Readers’ Choice Awards. A Registered Massage Therapist by trade, Kaylea is also an avid gardener, artist, Civil War buff, Special Ops aficionado, belly dance enthusiast and former nationally-carded softball pitcher. She and lives in Vancouver, BC with her husband and two sons.

Giveaway Details:
Kaylea is gifting a $50 eGC to Amazon.com or B&N.com (winners choice) to one lucky commenter during the tour. The more stops a reader leaves a comment on, the greater their chances of winning. Extra entry points can additionally be earned when a entrant ‘shares’ via the Rafflecopter widget. When friends follow the link that was shared back to the post, the sharer earns a point. Please follow the Rafflecopter directions, as well as see full Terms and Conditions for additional information.

Kaylea is hosting a Twitter party to celebrate the release of her first historical romance, THE VACANT CHAIR!

What: Twitter party to celebrate the release of THE VACANT CHAIR!

LOTS of pre-registration and door prizes are being given away!
Posted by Melody May at 1:21 AM