Silk Is For Seduction by Loretta Chase 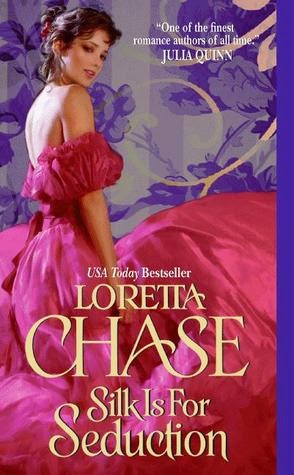 I first read Silk Is For Seduction by Loretta Chase back when it was first published and I thought the story plot was awesome. For those who don't know, I love stories with Dukes. I mean I have a ton of them. Anyway, I have to say that it was creative to have a dressmaker go after her next client who was suppose to be the next Duchess of Clevedon. After reading the book I was eager and excited for the next book, but I had to wait. Yes, I waited a year. However, I just wasn't feeling up to read the next book and decided to wait till the final book came out. The day has come that the third book is about to be release. YAY! Since it's going to be release in June I figure I would reread the first book and start the second one.

Anyway. I reread Silk Is For Seduction, and I still liked the story. However, there were somethings I kind of overlooked the first time. I guess I should share what I still liked and what kind of bother me.

Silk Is For Seduction starts out with three sister, Marcelline, Sophia, and Leonie Noirot. They start a dress shop and their goal is show case their wonderful work. Each of the sisters has a talent that helps the business. Marcelline is the designer, Sophia I guess for a modern term marketing, and Leonie honestly I can't remember. Anyway, the story focuses on Marcelline and her drive to capture the future Duchess of Clevedon. She basically hunts down Clevedon, so he would see that would his intended would look lovely in one of her designs. However, there is this huge cat and mouse game going on between them. That's not what bother me, what bothered me was how Clara (Clevedon's intended) was portrayed. At times she seemed aloof and then others like a spoiled princess. Especially, when she going to get new wardrobe. Okay, that's off my chest. Other than that, I did enjoyed the story. I liked how Marcelline pursued the Duke and how their relationship changed over the course. There perspective of one another changed. Yes, Marcelline was ambitious and she decided to take charge of her life, but you got to see why she's that way as her past comes to life. I enjoyed how she helped Clevedon to open up in a way, because in a sense he was closed off. In rereading the story, I got a chance to revisit what I forgot. For instance key parts to story that draw Clevedon more into Marcelline's life.

Anyway, I still enjoyed Silk Is For Seduction. I have say it was a creative idea to have dressmaker fall for a Duke, but also fall under the spell of the dressmaker.