After ending a relationship to a cheating, domineering man, Isabelle Masters takes off in her leased Mercedes, only to be arrested for grand theft and hauled to a local police station. To her surprise, she is rescued by the most unlikely person possible, Gabriel Dare, a man she’s been attracted to for far too long. Gabe offers Isabelle freedom along with an invitation to Eden, an exclusive island resort where everything and anything is possible.
Although Gabe yearns to possess Isabelle, he knows all too well he must fight his primitive need to bind her to him, and instead help bring out the independent woman she yearns to become – or risk losing her for good.
A woman who needs to run her own life. A man who needs to exert control. Can she surrender to his erotic demands without losing her sense of self once more? 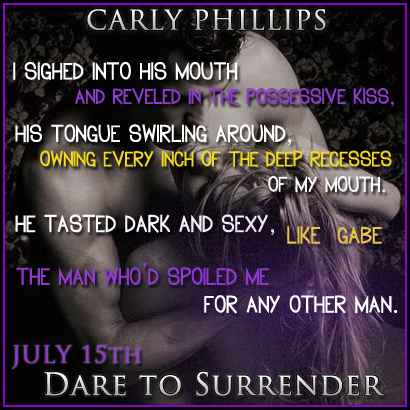 New York Times and USA Today Bestselling Author Carly Phillips has written over 28 romance novels with contemporary characters and plotlines that today’s readers identify with and enjoy. She sold her first novel to Harlequin Temptation in 1998 and hasn’t slowed down since. Carly’s life is filled with a devoted energy and passion to romance, family and career. Carly lives in Purchase, New York, with her husband, two daughters and two soft-coated wheaten terriers.