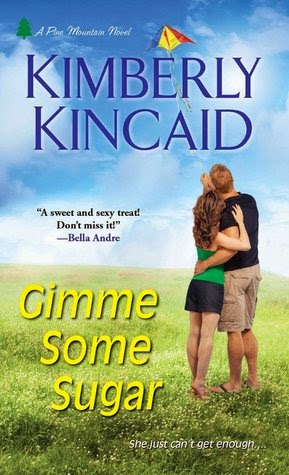 Out of the frying pan. . .and into the fire!

Desperate to escape the spotlight of her failed marriage to a fellow celebrity-chef, Carly di Matisse left New York City for a tiny town in the Blue Ridge Mountains. The restaurant she's running these days may not be chic, but in Pine Mountain she can pretend to be the tough cookie everybody knows and loves. Until she finds herself spending too much time with a way-too-hot contractor whose rugged good looks melt her like butter...

Jackson Carter wasn't looking for love. But he's not the kind of man to walk away from a worksite—or from a fiery beauty whose passionate nature provides some irresistible on-the-job benefits...

It's the perfect temporary arrangement for two ravenous commitment-phobes, except that Jackson and Carly keep coming back for seconds... and thirds... and fourths...

First off, I enjoyed Gimme Some Sugar. I thought it was a fun read. There were some serious points in the book, but overall a light read. You have Carly di Matisse whose trying to restart her career after a douche of an ex pretty much ruined it back in New York. So, she's in a small quaint town Pine Mountain and all she could think about is getting back to her old life. I can't be to critical on Carly for wanting to back to her old life, because being stuck somewhere you rather not be sucks. Plus, it takes a lot of getting use to. Fortunately, she has work to keep her busy. Of course, disaster strikes and her home needs a few repairs and low and behold we meet the hot construction guy, Jackson Carter. Serious, the guy had me drool with his tool belt. Anyway, he carries emotional baggage that he keeps to himself and with that he tends to have a fear of commitment. Gotta love. Lucky for him Carly isn't looking for a relationship, so the fun beginnings for them.

I'm going to standby that this is an adorable read with some hot spots. Carly and Jackson do tear up the sheets a few times. However, I love them together. They both have pretty jaded views on love. Carly stems from her ex-douchebag and Jackson stems from family complications. You see the chemistry between them and it's kind of awkward at first which brings on the chuckle. Yet they learn to be with each other without being with each other if that makes any sense. I love how both them have strong family ties that kind of stresses them both out.

Overall, Gimme Some Sugar is a fun beach read. You know one of those books that just isn't going to stress you out. So, if you are looking for a light fun read, you might give Gimme Some Sugar a go.

Kimberly Kincaid writes contemporary romance novels that split the difference between sexy and sweet, taking the traditional idea of boy-meets-girl and infusing it with a sassy magic all her own. She believes in fiery yet flawed characters destined for a crash-course in falling in love-- usually the hard way-- and injects her trademark humor as well as poignant touches into her writing to create her stories.

Kimberly's writing journey has led down some bumpy roads (that first manuscript is under the bed, where it is very likely to stay), but there has been some fresh pavement too (her second manuscript earned her very first contest final, and landed the fantastic Maureen Walters at the Curtis Brown Literary Agency). One thing is certain -- the wild ride of being a writer is a lot richer in both its ups and downs because of friends and readers along the path.

When Kimberly's not sitting cross-legged in an ancient desk chair known as "The Pleather Bomber", she can be found practicing obscene amounts of yoga, whipping up anything from enchiladas to eclairs in her kitchen, or curled up with her nose in a book. She resides in northern Virginia with her wildly patient husband and their three daughters.

a Rafflecopter giveaway
Posted by Melody May at 3:18 AM