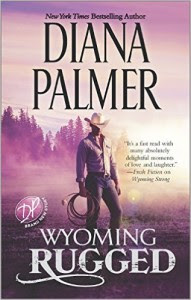 Billionaire oilman Blair Coleman has always taken care of his business. After having been used and cast aside by a woman he thought he loved, his personal life is far from his first priority. He knows only one has ever truly cared for him—but the irresistible blonde beauty is the daughter of his best friend.

Niki Ashton has seen her father’s friend wounded and she’s seen him fight. Blair is the strongest—and most stubborn—man she’s ever known. That very heart and passion makes him the man of her dreams, but whenever they’ve been in danger of getting close, Blair has always pushed her away.

It takes a possible tragedy to strip away all of Blair’s misgivings. Now it’s all or nothing: marriage, baby, family, forever. But will the choice be too much for Niki…or too late?

I was giving the opportunity to read Wyoming Rugged, and this is my first time reading this series. Wyoming Rugged can be read as standalone. YAY! I guess I should proceed with my thoughts.

What we have in Wyoming Rugged is a May-December romance. Blair Coleman is 16 years older than Niki Ashton. Through most of the book he has issues with his age and his attraction to Niki. While Niki is in the camp that age is just a number. She's also perceived to be young, naïve, and very shelter. In this day and age it's hard to believe, but since moving to Montana I can believe. Basically, Blair ends up marrying some woman who was basically after his money. However, there is more Elise's character which isn't reveal until closer to the end. However, I just thought of her as a gold-digger for most of the story. This left Blair bitter towards love. We watch Blair and Niki's friendship go up and down, and a lot of it had to Blair trying to protect both of them.

I actually liked the characters. It didn't bother me that Niki was young, naïve, and innocent. Yes, it was drilled into your head, but that's okay. Blair he was likable most of the time, except when he was being a jerk to Niki out misplace idea of protecting her from folly. Had this story been written in the setting of regency or victorian Blair probably wouldn't have a problem with his feelings for Niki. However, it's a modern story, and he doesn't want to seem to be chasing some young skirt. There's some information Blair could have used when he was dealing with his feelings for Niki.

Overall, I did like Wyoming Rugged, and it was a pretty good story. However, were times where it did drag, and I would have been okay without the last chapter. Instead of the last chapter there could have an epilogue with condense information. Besides that I enjoy the ups and downs of Blair and Niki's journey. It's a slow journey, because Blair had personal issues with his feelings for Niki and his marriage to Elise. If you are looking for a May-December relationship, Wyoming Rugged might be your cup of tea.

An icon in western romance, Diana Palmer has been writing with Harlequin since 1980 and has published over 180 titles, with over 61 million books sold! When not writing, Susan’s hobbies are gardening, knitting, crocheting, astronomy, archaeology and animals. She also has dogs, cats, birds and lizards.
Learn more about Diana at her website, DianaPalmer.com or Facebook

Please leave a comment for a chance to win a copy of Wyoming Rugged and don't forget to leave an email and a name, it just makes my life easier. If you don't want to leave that information leave a way to contact you via Facebook or Twitter. Thanks for stopping by today. If you want to follow the rest of the blog tour click the link and it will give a list of other blogs participating.