Audiobook: An Invitation to Seduction by Lorraine Heath (Review) 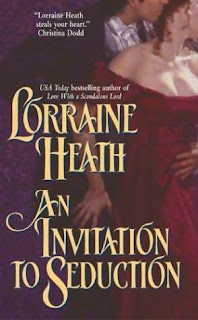 I struggled with An Invitation to Seduction by Lorraine Heath. Don't get me wrong, I love her writing and she's able to make impossible situations work. However, this one didn't work for me. You know it's not working for you when it takes you two weeks to listen to the story.

Lets start with the positives. Her writing is still amazing and the narrator they had selected to read the part did an excellent job at reading. She did a marvelous job between switching between an English and Texan accent. There were a couple of times that she didn't switch properly, but other than that a decent job.

Now my struggles. I struggled between Kitty, Richard, and Nicky, and their relationship. All them were pretty selfish in their own ways. We have Kitty who wanted to marry to feel safe, and she felt safe with Nicky. Truth be told, Nicky kind of regarded Kitty like sister, but she was a convenient person to marry. I had a problem with Kitty protesting she was in love with Nicky and try to force herself to believe it. At the same time she felt passion for Richard, but she was afraid of her passion which stems from her mother being a saloon girl. She has strong feelings for Richard, but willing to marry Nicky because he was safe. Think of England. Richard was selfish cause he wanted Kitty, because he thought she would make the perfect duchess. Basically, he pursued her when she was Nicky's girl. Richard had information that no one else had.

It wasn't bad, but it definitely wasn't my favorite. Kitty grated on my nerves and I just wanted to shake her and tell her it's okay to feel passion and safe choices aren't always the best choice. I did like how Richard was understanding during her time of need. He wasn't without flaws, but I did like him the most in the story. He was always trying to think of ways to keep Kitty comfortable. Like I said it wasn't my favorite, but it's not going to make me stop reading other Lorraine Heath books. I do love her books, just not this one. I know the next one will be more to my liken. Yes, this story has worked for others, just not me.