The Rogue Not Taken by Sarah MacLean (Review) 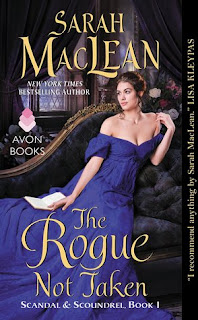 In Sarah MacLean's The Rogue Not Taken I found myself captivated from the first page. I mean we meet Sophie Talbot. but society dubs her as one of the "Spoiled S" or the "Dangerous Daughter". She has no desired to be called that. Actually, she rather be in the background and not be noticed, but she became noticeable when she shoved the Duke of Haven in the fishes. Which has made her the most scandalous sister of them all. I mean it's not everyday you call your brother in law a philandering ass. She didn't use those words I did. Anyway, the family being on the fringe of society and she might have outcasted them. We don't quite for sure since she made her big mistake from the Liverpool party. You think that was a splash to the beginning wait till you encounter the rest of the story.

I absolutely adore Sophie, because she wants nothing to do with society. Yet King doesn't believe her intentions. At times he seems cruel and mean. Those would be apt descriptions, but it's not until his backstory is fully reveal. Even that doesn't show the degree he's been manipulated when it came to "love". It's quite devastating to think about it, so he has no desire to be trapped by some upstart. Throughout the journey Sophie is try to tell him he's being ridiculous and has no desire to trap him. I feel for Sophia and her shabbily treatment, but she makes the best of the situation.

Along the journey, you watch these two get underneath each others skins, and you wonder how are they every going to fit together. It's a long journey for them, but an entertaining one. I mean we have Sophie dressing up like a livery in order to make her grand escape that she didn't exactly planned on. Whoops. I found The Rogue Not Taken enjoyable journey across to the great north. I was entertained by the fact that no one notice that Sophie was a girl. The bickering match between her and King were always something to watch. Those who have enjoyed Sarah's previous books will certainly find this a delight. They will root for Sophie and might want to hit King upside the head at times, but they will be hooked with this story. I can't wait to see what scandals Sarah will cook up next.