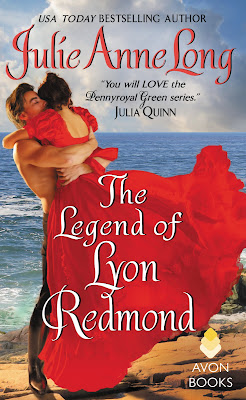 Blurb
Bound by centuries of bad blood, England’s two most powerful families maintain a veneer of civility...until the heir to the staggering Redmond fortune disappears, reviving rumors of an ancient curse: a Redmond and an Eversea are destined to fall disastrously in love once per generation.

Excerpt from The Legend of Lyon Redmond:


She didn’t hear him.
She was transfixed in horror by the first words on the page.
The Legend of Lyon Redmond
Her breath left her in one painful gust, surely as though a broom handle had been driven into her ribs.
But the worst was yet to come.
Oh, if you thought you’d never see
A bride called Olivia Eversea
Well come along with me, lads, come along with me!
Her pretty self was on the shelf
And at last a-wed she’ll be.
Oh, everyone thought
It was all for naught
And she’d dry up and blow away.
But will Redmond return
And make her burn
For the love of yesterday?
Sensation abandoned her limbs.
Where oh where did Redmond go?
Why oh why did he flee?
Is he riding the Nile on a crocodile?
Or did he take to the wide open sea?
Did a cannibal eat ’im?
Is he living in Eden
With Adam and Eve and the Snake?
Did Miss Eversea scare ’im
Into the arms of a harem
Where he lolls about like a sheik?
Shock reverberated through her as though she’d been driven into the ground with a mallet.
And all the while the little chorus behind her sang on.
Someone back there, she thought irrationally, had a lovely baritone.

Julie Anne Long originally set out to be a rock star when she grew up, and she has the guitars and the questionable wardrobe stuffed in the back of her closet t prove it. When playing to indifferent crowds at midnight in dank clubs lost its, ahem, charm, she realized she could incorporate all of the best things about being in a band—namely, drama, passion and men with unruly hair—into novels, while at the same time indulging her love of history and research. So she made the move from guitar to keyboard (the computer variety) and embarked on a considerably more civilized, if not much more peaceful, career as a novelist.
Julie lives in the San Francisco Bay Area with a fat orange cat. (Little known fact: they issue you a cat the minute you become a romance novelist.) 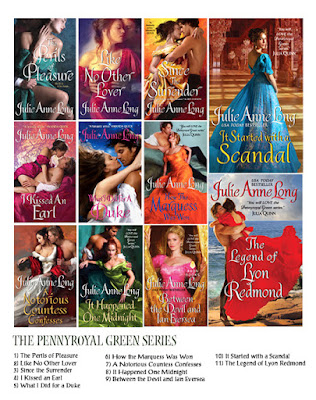 Rafflecopter Giveaway
(Grand Prize of a $50 Gift Card to eBook Retailer of choice, Second Prize winner will get the complete set of Pennyroyal Green Books 1 – 11 by Julie Anne Long)