Rescued By The Ranger by Dixie Lee Brown (Review) 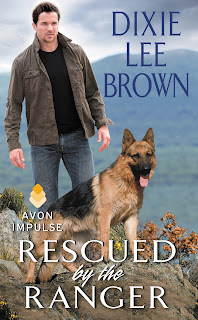 OH MY GOODNESS, AMAZING! I absolutely loved Rescued By The Ranger by Dixie Lee Brown. I had a rough time with the beginning, and a lot of that stemmed from heroine, Rachel Maguire.
She totally rubbed me the wrong way, and the reason was she feared for Garrett Harding life. There were times I wanted to shake and tell her "He's an Army Ranger they just don't let any guy be a Ranger." So, you could see my frustration. It was good portion of the story that I just wanted to smack her upside her head. That wasn't the only reason I had a hard time with Rachel, the other reason was she wasn't willing to forgive Garrett for something he didn't know about. Basically, she formed an opinion that he was a selfish jerk. The poor guy had to prove to her that he was a good guy. She didn't make it easy.

Now you are wondering why I loved this story when I couldn't stand Rachel. Excellent question. It was Garrett and his pal Cowboy, they truly won me over. Also the last six chapters had my heart pounding. Garrett and Cowboy showed Rachel that they can be their for her and anyone else that needed him.

So, for the majority of the story we had Garrett trying to prove to Rachel that nothing bad is going to happen and she needed to trust him. Trust is not an easy commodity for Rachel to give, and its a good portion of the story for her to give it to Garrett. Once we hit the last six chapters, talk about a twist in the story. I didn't expect to see the stalker. An excellent twist to the story. We know that their is a stalker in the story, but it's not who would expect to be. I was kind of shocked. Those last chapters really had my heart pounding. The big lead to the end was just amazing. Definitely worth the read.

Rescued By The Ranger is definitely worth a looking into. Yes, I did have issues with Rachel and I struggle with her character. However, the story is just amazing. I love the interaction between Garrett and Rachel, because she didn't easy up on Garrett. When she was dishing him crap, he took it like a standup guy, because he could understand where she was coming from and he wanted to prove her that he was good guy. I hope we get a story for Garrett's brother and possibly a few other characters more.