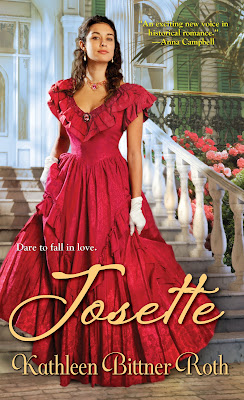 "An exciting new voice in historical romance." --Anna Campbell, award‑winning author of What a Duke Dares

"Monsieur Andrews, welcome to my home."

At the smoky, velvet sound, Cameron swung around. Every function in his body--heart, breath, blood ceased to function.

She was lovely. More than lovely.

Tendrils of raven hair framed a face so exquisite, it disarmed him. Her mouth, a soft, dewy pink, parted. And those eyes, as dark as Creole coffee, intelligent and assessing, roamed over him and then back to take hold of his. He needed to step closer, to stroke her skin. To possess her. But would his wealth and worldly experience be a match for the free-spirited Cajun-born widow?

Across the oceans, between worlds old and new--two lost souls find themselves at a crossroads.

My Thoughts:
Truth be told I wasn't sure how I was going to feel about Josette, because there is a lot going on in the story. First off, we have Cameron who has been a widow for about two years and he finds out he had a long lost daughter. He finds out about 14 years later. Yeah, that's a lot to take in, and to top it off he finds himself attracted to her aunt. We meet Josette who is also a widower too. We also found out that she use to have a crush on Cameron, but became angry when he knocked up her sisters child. She still held on to this resentment. However, there is more behind how her sister ended up with a child from Cameron. We can't forget to mention Cameron's daughter, Alexia. Boy that girl is trouble. Being thrown into immediate father roll hasn't been easy and he says some hurtful things.

In the story, we see Cameron trying to build a relationship with his daughter and draw closer to Josette. We have these two relationship develop. This a good story, because we didn't have Cameron and Alexia instantly bonding. Instead we watched them learn to trust one another, and that wasn't the easiest thing to do. After all, Alexia is practically a wild child during the book, and had to learn boundaries. On the romance part, we didn't have Cameron and Josette jumping into bed right away, but you say the attraction between. I would like to see them to get together sooner, but it was a nice simmer between the two. If it wasn't enough to find out you have a long lost daughter, but throw in the fact her uncles are former enemies. *Snickers*

Overall, Josette is a mix of Louisiana goodness. You get see a lot through this story along with the new relationships Cameron is making. We see New Orleans, but we also get to see the scary part of the bayou. Plus, you have secrets reveal that concern Josette and her brothers. I hope we get to see stories for Josette's brothers and a few other characters. Kathleen does an amazing job on transporting you to Louisiana that you might have a hanker for some étoufée. Yep, Josette is a pretty good read.

In less than ten minutes, Cameron and Alex were in and out of the mercantile and in front of the public baths.
Alex twisted away. “I ain’t goin’ in there to get buggered by some lusty sailor who can’t wait to be slidin’ his wiggle worm into some doxy.”
Cameron halted, his neck hairs bristling. “Is that why you refused a bath aboard ship?”
A slow turn of Alex’s head away from Cameron’s eyes, and he let go a soft, “Oui.”
By now, Cameron had moved beyond hunger and frustration, and was fast working his way into full-blown anger. “Then it’s to my home we’ll go, but if you so much as slip a candlestick inside one of your pockets, I’ll have your head on a platter.”
“Oui, Papa.”
“Don’t call me that!” Hell, the boy could belong to his cousin, Trevor. No, those were definitely Cameron’s eyes. But still, the idea was preposterous. “How old did you say you were?”
Alex shrugged. “Didn’t.”
“Well, do so, now,” he roared.
Alex only grinned. “I’ll be needin’ dat bath first, don’cha know.”
Bates, a miner-turned-butler, met Cameron at the door to his California Hill mansion. Cameron shoved the paperwrapped clothing at him. “See to it Alex here gets a decent bath, and have Cook fix a couple of plates.”
“Jambalaya would suit,” Alex piped in. “But I ain’t takin’ no bath with your man here tinkin’ to scrub me clean an’ bugger me at the same time.”
The butler’s cheeks flushed, but he made no comment. Cameron fought a grin. That must have curled the old boy’s toes. “There’s no jambalaya to be had in San Francisco, and you can bloody well take a bath alone, but I’ll be checking your pockets when you come down, you hear?”
“Oui,” Alex said, and jauntily climbed the stairs behind Bates. “You got yerself a peculiar accent, Papa. Sometimes you sound like a right good Frenchman out of Nawlins oughta, but other times you sound like a proper Englishman. Just saying so you know I pays attention.”
“Christ.” Cameron turned on his heel and made his way into the library, where he dropped onto the sofa with an exaggerated exhale. How the devil could a predicament like this have popped up out of nowhere? And now of all times, when he was about to embark on an endless journey to nowhere.
A Cajun bastard? Not likely. Cameron had been just seventeen when he left New Orleans. He and Trevor had been hell-raisers, which was why Cameron had ended up in a private school in England and later at Cambridge, but the last thing he could’ve done was leave a child behind. An hour later, when Alex failed to appear, Cameron went looking for him in the guest quarters. He gave a quick rap on the door.
“Entre, Papa. I be all cleaned up and dressed in my new clothes, now.”
“Haughty little fool,” Cameron mumbled, and helped himself inside.
And nearly fell over.

Born in Minnesota, Kathleen Bittner Roth has lived all over the U.S.: Idaho, Washington, California, Texas and New York. Currently, she resides in Budapest, Hungary, often called the Paris of the East. Kathleen has won countless awards for her writing, including finaling in RWA's prestigious Golden Heart contest. She is an active member of Romance Writers of America, including the Hearts Through History chapter and has been a contributing editor for an online romance magazine as well as writing and producing successful seminars and meditation CDs.

You can learn more about Kathleen and her books at kathleenbittnerroth.com


Link to Follow Tour:
http://www.tastybooktours.com/2015/08/josette-when-hearts-dare-3-by-kathleen.html
Posted by Melody May at 9:01 AM