Claimed by the Warrior by Savannah Stuart (Review) 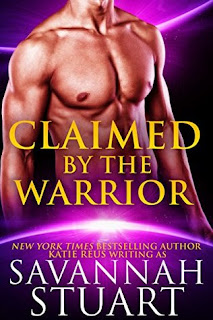 Savannah Stuart's Claimed by the Warrior is the third story in the Lumineta books. Of course I haven't read the previous books, but I think it's safe to say you can get away with not reading the previous stories. Granted there might be mention on how all humans ended up on Lumineta. I'm guessing. Anyway, we meet Leilani who goes up into mountain region without a mate or a chaperon. This is a big deal, because any unattached female can be held captive for basically month. Of course, this has a point, because they are so few female they figured that if they hold them captive, while they get courted the female might find reason to stay. Yes, a bit misguided, but desperate times call for desperate measure. Poor Leilani is held captive, and she does start falling for her captive (I know some of you are going Stockholm Syndrome). Actually, Con isn't a bad guy. He's totally an alpha male. It's hard for him to understand Leilani's feelings, but he slowly does.

Copy provided by author.
Posted by Melody May at 2:33 PM