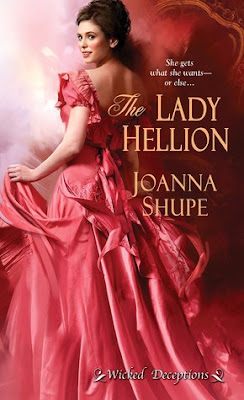 Blurb:
A Marquess’ daughter, Lady Sophia Barnes doesn’t take no for an answer. Especially when she’s roaming London’s seedy underground…dressed as a man.
A rabble rouser for justice, Sophie’s latest mission is to fight for the rights of the poor, the wretched—and the employees at Madame Hartley’s brothel. She’s not concerned about the criminals who will cross her path, for Sophie has mastered the art of deception—including the art of wearing trousers. Now her fate is in her own hands, along with a loaded gun. All she needs is instruction on how to shoot it. But only one person can help her: Lord Quint, the man who broke her heart years ago. The man she won’t let destroy her again…

The last thing Damien Beecham, Viscount Quint, needs is an intrusion on his privacy, especially from the beautiful, exasperating woman he’s never stopped wanting. A woman with a perilously absurd request, no less! For Damien is fighting a battle of his own, one he wishes to keep hidden—along with his feelings for Lady Sophia. Yet that fight is as hopeless as stopping her outlandish plan. Soon all Quint knows for certain is that he will die trying to protect her…

My Thoughts:
Truth be told, I wasn't sure about The Lady Hellion. I was a little worry on how the story would play out. It wasn't until I started to get all the pieces of Sophie's past that it started to make sense. Things that might be helpful. Before she even met Lord Quint she was on the cusp of being engaged to another fellow. However, circumstance played out that it didn't happen, and left her missing something. You get my drift. Anyway. When Quint started courting her, she felt that she wasn't good enough for him. He decided to move on, because he wasn't get the reception he would like. Of course this led to heart break to both parties. Instead of getting marry what does any young lady do when she finds herself ineligible, you pick a cause. That's right! Sophie has decided to champion for those who not care them, the ladies of the night. She has stumble upon a murder/mystery and she wants to find who is doing this and stop them.

Anyway, she turns to Quint for help, but he's unable to because of circumstances. He starts believe he going mad like his father. However, I wonder if it would be something else like agoraphobia. Yet, I'm not quite sure. Ever since the accident, he has had this fear leaving his residency and basically has become a recluse. When Sophie steps into his life begins to feel alive again. At the same time, he feels that he isn't the right man for Sophie, because of his condition. Of course, she believes that she isn't good enough be a wife to any man. Yes, it stems from her previous relationship.

Okay, The Lady Hellion took a little time to get into the story. Yes, it's a little slower than the previous two stories, but once these two started to getting into a relationship of sorts it does pickup. Both Quint and Sophie have a few stumbling blocks to go over, fortunately they are able to overcome them.  It's a pretty good story if you are able to stick out the first half of the story. If you like a little murder/mystery with your romance you might enjoy The Lady Hellion.

Award-winning author JOANNA SHUPE has always loved history, ever since she saw her first Schoolhouse Rock cartoon. While in college, Joanna read every romance she could get her hands on and soon started crafting her own racy historical novels. She now lives in New Jersey with her two spirited daughters and dashing husband.