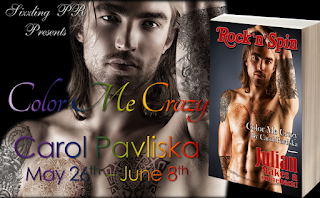 Hello Carol and welcome. Okay, I guess I should dive into the questions.

Thanks for having me!

It's a pleasure to have you. All right, your character Julian has synesthesia, and I’m pretty sure not many people out there would, would you being willing to share what that synesthesia is?

Synesthesia is a neurological phenomenon which a surprising number of people experience in varying degrees. It’s basically a domino effect of senses. One of the five senses is stimulated—think about smelling fried chicken—and it triggers another sense that is seemingly unrelated—now the smell of fried chicken is red. Or maybe the smell of fried chicken is itchy. But most people with synesthesia do a color-sound association—they see sounds as colors, which is how it usually presents for my character, Julian.

Where did you come up with the idea of having a character with synesthesia?

I read an article about synesthesia, and then learned my daughter knows several people who have it. She’s a classical pianist, and it seems that people who are drawn to music performance—playing it or writing it—exhibit synesthesia in higher percentages than the rest of us. I’d already planned to write about a musician, and once I learned of synesthesia, I just knew it was going to be his thing. And oh my God, is it his thing! He likes to think he’s a low-key kind of guy who just wants to be left alone, but in reality he’s all about the drama and his emotions run on the excessive/extreme side. Throw in some synesthesia and BAM! The man is a mess. A delightful, sexy, angsty mess.

How would Julian describe his life in a nutshell?

He describes his life as being lived inside a psychedelic kaleidoscope. And he can’t fathom that other people don’t experience things the same way he does. At one point, he tries to find out how Cleo, the heroine, experiences him.

Julian looked up from where he stood with the road crew, waved, and headed her way. He continuously jaunted to her side to touch base with a kiss or hug before heading back into the fray. This time, he stayed to nuzzle his nose into her hair.

“Tangerines?” she asked. She wanted to keep him with her for a while.

That caught her off guard. She wasn’t sure how to answer. “I don’t have a good way of describing it. I like it, though.” She gave him her best hubba-hubba eyes.

“Nothing. It’s just a smell, and I only experience it with my nose. Although”—she leaned in and inhaled his unmistakable, delicious scent—“it is often accompanied by warm, tingly sensations in my nether regions.”

He raised his eyebrows. “Your nether regions? You’re quite wanton,” he said, before getting right back to the point. “But when you’re with me it’s just blank? Like, there’s no thing or color or anything to go along with me?”

She laughed at the unbelievable way he couldn’t fathom there was no “thing” to go along with him. No colors, numbers, scents, or shapes. “No, you goof. It’s just you.”

“Oh, you’re anything but,” she replied, pulling him close for a steamy kiss.

What are the first thoughts that come to Julian’s mind when he meets Cleo? What are Cleo’s thoughts on Julian?

Cleo is dancing the night away with friends on her thirtieth birthday (with some help from Jose Cuervo) when Julian first spots her. And he assumes she is “either having a horrible fit or suffering from an inexplicable lack of rhythm.”  He offers his assistance, and things go from there, eventually ending with an angry nipple pinch—no small matter since his nipple is pierced, because of course it is.

What is your favorite moment in the book?

My absolute favorite moment in the book is when Julian realizes Cleo loves him for who is actually is, rather than the rock star image he tries to project. Until that moment, he doesn’t really believe he is lovable. I think we all have parts of ourselves we feel must be kept hidden in order to be loved, and it’s a truly wonderful thing to know someone has seen those parts and loves you anyway.

If you were to write a biography of your life, what would your title be and why?

It would be called Stranger Than Fiction. I think a lot of people’s lives are stranger than fiction, and my biography would probably begin with the fact that I’m vegan and live on a cattle ranch.

What color would you pick to describe you?

Yellow! And it’s for a silly reason. When I was in the first grade, our reading book had a character named Carol. She had bright yellow hair, and to this day, when I hear my name I think yellow! It’s also my “happy” color (maybe I have a bit of synesthesia, myself). But other people probably think of me in earth tones. Those tend to be the colors I wear. Wow, Mom. Another brown shirt….

Last question, if your characters would to describe you, what would they say about you?

Julian would say my taste in music is spot on, but he would absolutely despise my lack of organization, and he wouldn’t understand how I live without a working iron. Cleo, on the other hand, well heck. What can I say? She and I are going out for drinks later—probably some place with live music. We both have a thing for guitarists.

Thank you for coming to What I’m Reading.

You’re welcome! Thanks for giving me an opportunity to talk about my characters. Never fall for a rockstar...

Julian Wheaton views the world through a kaleidoscope of synesthesia, seeing the colors of every sound he hears. His life as an iconic rock guitarist was a stressful psychedelic trip that nearly destroyed him. Now he’s abandoned the rock ’n’ roll lifestyle for the peaceful sanctity of his recording studio, but when fiery Cleo Compton comes to work for him, she brings chaos with her.

Cleo Compton has had her flings with rockstars—and it’s left her wary and bruised. Julian may have those sexy bedroom eyes and drool-worthy tattoos, but Cleo is determined to keep things strictly professional—until Julian turns out to be every dream she’s ever chased. When he risks it all to hit the road with a band again, Cleo fears he’ll return as the one thing she can no longer abide—a rockstar.
Buy Links:
Amazon * Barnes & Noble * iTunes *  Kobo * Goodreads * Entangled

Carol Pavliska began her writing career as a family humor columnist and blogger, a pursuit she abandoned when her children became old enough to realize they were being exploited. To save them from further embarrassment, she turned to writing fiction. The kids are still embarrassed.

When she’s not creating unrealistic expectations as a romance writer (ripped abs, dramatic temperaments, and eyes like bottomless pools of Hey Girl), she functions quite nicely in her real world, which consists of a delightfully stable husband and five children. 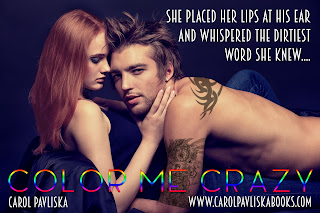