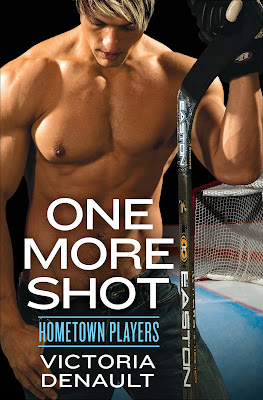 They say you only get one shot at making your dreams come true. Jordan is determined to take two.Drafted by the NHL at eighteen, Jordan Garrison was headed for fame, and there was only one person he wanted to share it with-Jessie Caplan. He was crazy in love with her, and had finally told her so. They shared an amazing night . . . and then everything fell apart. Jessie tries not to think about the night she gave herself to Jordan-or how he broke her heart. She tries not to think about it, but she does. Especially now, when she's staring into his sky-blue eyes for the first time in six years. After so much time and torment, she can't tell if she loves him or hates him. But Jordan has learned enough to know a connection like theirs is rare. He was lucky to find Jessie once. No way will he lose her again.

Excerpt from One More Shot:


Outside I’m greeted with a crisp, sunny fall afternoon. It’s not raining, which in Seattle is always a plus. When I was traded to the Seattle Winterhawks last season, I wasn’t all that thrilled about living so far from home. At least when I played in Quebec City, it was only an eight-hour drive from my hometown in Maine. But Seattle is fun, my team has been great and the fans here are a small but passionate bunch. I’m happy now professionally. At least I was until I broke my left ankle. Hockey is the only thing I’ve ever wanted to do with my life. It’s the only thing I’ve ever been great at and the one thing I have never screwed up. This is the first injury in my professional career. It’s a big one, and I couldn’t be handling it worse if I tried.
As I drive to the rink I call my brother, Devin.
“Hey, Jordan,” he says easily, answering on the second ring. “What’s up?”
“Lily Caplan died.”
“I know.” Devin sounds stunned for a minute. “Mom told Ashleigh.”
“She wants me to go home for the funeral,” I respond as I

pull my SUV off the I-5 and down the familiar downtown Seattle streets to the hockey arena.
“Makes sense,” he says.
“How does it make sense?” I demand. I was calling him for support—so he could help me brainstorm excuses for not showing up. “Mrs. Caplan hated me. She hated all of us. She thought we were—and I quote—‘derelict hockey punks.’ ”
“She’s dead,” Devin reminds me snarkily as I slow at a stop sign and lean my head against the leather headrest. “This isn’t about her. It’s about supporting your best friend.”
“Ex–best friend,” I retort. “We haven’t talked in years.”
“And whose fault is that?” Devin mutters almost under his breath—almost inaudibly—but I hear it and it pisses me off.
“She left town, remember? Why does everyone blame that on me?”
I wave my players’ pass at the security guard at the gate to player parking. He’s obviously a little surprised to see me on a day off, but he raises the gate without question. “I should be concentrating on getting my leg healed. My family should be supporting that.”
“Oh, I’m sorry,” Devin counters, and the sarcasm rings loud and clear through the Bluetooth. “Is your leg going to stop healing just because it’s in Maine instead of Seattle?”
“Go fuck yourself.”
“Love you too, bro.” He laughs, enjoying this way too much if you ask me. But when the laughter dies he grows serious. “Look, Jordy. I would be there if I could and so would Luc. The Caplan girls are family. We’ve all given you and Jessie enough time to figure out how to be grown-ups, yet you can’t seem to do it. So I’m telling you be a grown-up and go and support her.”
“Fine. I’ll go if the coach lets me.” “He’ll let you.” “Shut up.” “Shutting up,” Devin promises, and then the line goes dead.
I sigh loudly, get out of the car and slam the door. Hopefully Devin is wrong and Coach Sweetzer has some reason he needs me here. Because as painful and frustrating as it was to be here dealing with my injury and not being able to play hockey, seeing Jessie Caplan again would be worse—much worse.

Victoria Denault loves long walks on the beach, cinnamon dolce lattes and writing angst-filled romance. She lives in LA but grew up in Montreal, which is why she is fluent in English, French and hockey.