A Duke But No Gentleman by Alexandra Hawkins (Review) 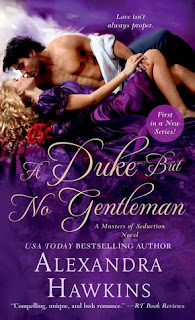 Alexandra Hawkin's A Duke But No Gentleman is definitely not for everyone. Some aren't going to like the hero and say he isn't a real hero. That might be a tad bit true. However, Alexandra's heroes aren't really hero material, they tend to be down right scoundrels. So, if this isn't your type of guy you might want to move on, but if you are willing look past bastard of a hero you might find this enjoyable. Enough of the preamble and lets get on with my thoughts.

I for one do enjoy Alexandra Hawkin's writing, and I did enjoyed her A Duke But No Gentleman. At the beginning of the story we meet Tristan Bailey Rooke, Duke of Blackbern and Cason Brant, Marquess of Norgrave. Now these two guys have been best friends for ever, and practically did everything together even shared women. Yes, they sound like upstanding gentleman <insert the eye roll>. So, when Blackbern encounters Lady Imogene he kind wants to keep her a secret, but his friend is all too keen. Basically, the wager is established. It can't be any simple wager, oh no it has to be the claiming of her maidenhead. We see them trying to charm and seduce the young lady. Neither one of them actually plays fair, but Norgrave is a bit more ruthless in his pursuit.

Now Imogene is taking in her first season and enjoying the attention that she is receiving from these two scoundrels. Yes, they are scoundrel. However, I actually thought Blackbern wasn't as bad as Norgrave. Norgrave gave off this icky, slimy feeling. However, that's how you are suppose to feel and you are suppose to like Blackbern more. Imogene actually is drawn more to Blackbern. Even though Blackbern is a scoundrel you are given the impression that he is better between the two.

I stand with those who liked A Duke But No Gentleman. I had no problem with Blackbern lacking a moral fiber. I did like the guy. *Spoiler* I could have fine without the rape scene, but it was Norgrave's way at attacking Blackbern. Norgrave definitely had no morals, he was ruthless. I did like the interaction between Imogene and Blackbern, they were kind of fun to watch there banter.

Like I said at the beginning this story is not for everyone. I think those who had enjoyed Alexander's previous work will enjoyed this story. It is a little rough at times, but it was still enjoyable. If you don't mind a not quite a hero guy, you might enjoy A Duke But No Gentleman.