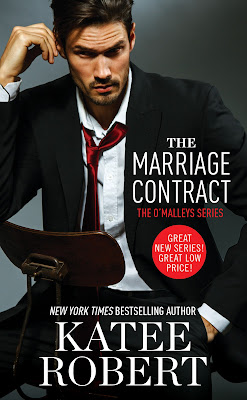 New York Times and USA Today bestselling author Katee Robert begins a smoking hot new series about the O'Malley family-wealthy, powerful, dangerous and seething with scandal.
Teague O'Malley hates pretty much everything associated with his family's name. And when his father orders him to marry Callista Sheridan to create a "business" alliance, Teague's ready to tell his dad exactly where he can stuff his millions. But then Teague actually meets his new fiancée, sees the bruises on her neck and the fight still left in her big blue eyes, and vows he will do everything in his power to protect her.Everyone knows the O'Malleys have a dangerous reputation. But Callie wasn't aware just what that meant until she saw Teague, the embodiment of lethal grace and coiled power. His slightest touch sizzles through her. But the closer they get, the more trouble they're in. Because Callie's keeping a dark secret-and what Teague doesn't know could get him killed.

Excerpt from The Marriage Contract:


“We have to get to know each other at some point—might as well start now.”
“What would you like to know?”
“Everything.”
She froze, her glass halfway to her lips. The warmth in her stomach burned hotter. “That’s a bit much for a single dinner, don’t you think?”
“Where would you like to start?”
If she was smart, she’d make polite conversation through dinner and get out of here as quickly as she could. This man wasn’t anything like what she’d expected, and that made him dangerous. But she found herself asking, “Do you like being an O’Malley?”
He looked away and took a long drink from his glass. “Do you always go straight for the throat? You could have eased me in with something simple like my favorite color.”
It was the kind of meaningless question she should have asked. This man might be her only ally, and she should be worrying about keeping him in her corner instead of trying to figure out the way his mind worked. But she needed to know. So she waited, swirling her wine and watching him wrestle through her question.
Teague finally sighed. “No. I hate it. I’d burn the damn dynasty to the ground if I thought it’d free my siblings, but that’s not an option.”
She went still, unable to believe he’d just told her that. It was the kind of information that someone sinister could easily use against him. If she wanted to hurt the O’Malleys, cozying up to a son who hated them was a good way to go about it. “Ah.”
“You wanted to go in with the big guns, you get big answers.” He gaze a humorless smile. “And it’s not new information. All you’d have to do is ask around to realize that my father and I see things differently.”
“You hate it that much?”
“Look at us, angel. We’re little more than strangers and we’re going to be married inside of four weeks. And that’s the least of my problems—no offense.”
“None taken.” Didn’t she feel exactly the same way? He seemed like a decent enough man, but he was still one that she’d known for a grand total of a single day. The difference between them was she’d willingly do this and worse to tip the Sheridans onto the right side of the law. “I just can’t imagine hating my family.” As soon as the words were out, she wanted to take them back. It was too personal, too much, to admit to this man.
“I don’t. Not really.” He stared into his whiskey. “I just hate the things they do in the name of power.” He finally looked at her, pinning her in place with his gaze. “Though I’ll admit there’s more good to this situation than I would have expected.”
Desire rose up in a tidal wave that had shivers working their way through her body. Good lord, the man knew how to turn a conversation into something else entirely with a single look. She reached for her wine again, only to find the glass empty. Keep it together, Callie. You know how to flirt.
Yes, she did. But this wasn’t harmless flirting. Nothing about Teague was harmless. He saw too much. He was an O’Malley. And, perhaps most importantly, he was going to be her husband in a very short time.
He seemed to realize her mind was going a million miles a second, because he sat back, breaking the moment. “Now I have a question for you.”
“Yes?” She put as much nonchalance into her tone as she possibly could. The candlelight played along his cheekbones and jaw, the shadows dancing over his cheeks, following a path her fingers itched to trace. What was wrong with her? She should be focusing on what their next move was, not on how intimate it was to sit this close to him.
“Would you have actually married Brendan if someone hadn’t done you the favor of offing him?”
She looked into his dark eyes and couldn’t lie. “No.” That man was a monster. Once she knew the truth about him, she never could have signed her life away to him. And if it took her all of a week to find out what kind of man he was, Papa should have known a long time ago. She shifted, the realization sitting like a block of concrete in her stomach. Had he known and gone forward with the engagement anyways?
He must have. There was no other explanation.
“Which begs the question—are you planning on marrying me?”
It shouldn’t be different—Teague was just as much a stranger as Brendan had been. But it was different. Even knowing him such a short time, she couldn’t shake the belief that he’d never raise a hand against her. That didn’t mean she could trust him, though, unexpectedly revealing information or not. He was loyal to his family first and foremost, the same way she was.
She wanted Teague, and a part of her that didn’t have a lick of sense thought she could trust him. That, more than anything else, made him a potential threat in a way that Brendan never could have been.
“That’s quite the proposal, Teague O’Malley.”
He grinned, completely unrepentant. “I plan on making up for the lack of originality in other ways.”
It was all too easy to imagine exactly the sort of thing his tone suggested. It took her back to that alley, to that kiss, to her desire for more. Callie reached across the table and snagged his whiskey, lifting it to her lips with a shaking hand. “Yes, Teague. I’ll marry you.”