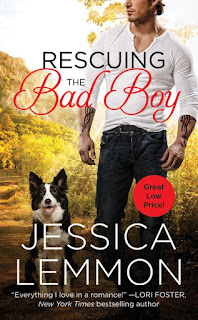 I love Jessica Lemmon's Rescuing the Bad Boy. This story just grabbed me from the first page. However, I had to put it done, because of other circumstances. This is one of the stories I wish I had a clone at times, but I finished it. Boy did it get me. Oh my gosh what an amazing story.

Okay, we have Donovan Pate who grew up in Evergreen Cove, but he had no desire to ever return once he left. However, he has to return for the home that was left to him. All he wants to do is sell it and get the hell out of there. Too bad things can't go according to plan. Basically, he finds out he can't sell the house until after a certain charity event, and he tries to talk Sofie Martin out of it. Well, she's not having any of that and she plans to stand up to Donovan.

When Donovan shows back up, he tries to renege the contract his grandmother signed. That whole situation doesn't look good, but he's unable to find a loophole so he's stuck with Sofie around the house getting ready for the charity event.

All right, there is a lot of tension between Donovan and Sofie. A lot has to do with the night seven years prior and boy he was a jackass. So, Sofie is trying to protect herself from getting hurt again, but Donovan can't seem to stay away from her. Finally, they cave! Of course, they have to issues to work through. Like Donovan overcoming his past and seeing that he's worth saving. There isn't much wrong with Sofie, but she just needs to be understanding to Donovan and willing to go through a little pain.

Man this story is an emotional wrecking ball of a read, but oh so good. I love Rescuing the Bad Boy, because it's definitely a story about overcoming the past and finding happiness. I can't wait for Connor's story, because he just seems like so much fun. Most of the parts that had me cracking up were with Connor in them. So, grab yourself a plate of shrimp scampi and s'mores and enjoy Rescuing the Bad Boy. Definitely a worth while read.