Catching Cameron
A Love and Football Novel #3
By: Julie Brannagh
Releasing May 6th, 2014 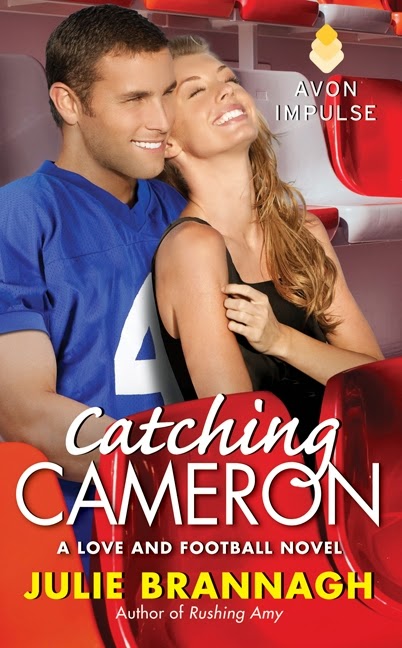 Star sports reporter Cameron Ondine has one firm rule: she does not date football players. Ever. She tangled with one years ago, and it did not end well. Been there, done that.

But when Cameron comes face-to-face with the very man who shattered her heart—on camera, no less—her world is upended for a second time by recklessly handsome Seattle Shark Zach Anderson.

Zach has never been able to forget the gorgeous blonde who stole his breath away when he was still just a rookie. They've managed to give each other a wide berth for years, but when their jobs suddenly bring them together again and again, he knows he has to face his past once and for all.

Because as they spend more time together, he becomes less focused on the action on the field and more concerned with catching Cameron.

Author Info
Julie Brannagh has been writing since she was old enough to hold a pencil. She lives in a small town near Seattle, where she once served as a city council member and owned a yarn shop. She shares her home with a wonderful husband, two uncivilized Maine Coons and a rambunctious chocolate Lab.

Julie hasn't quite achieved the goal of owning a pro football team, so she created a fictional one: The Seattle Sharks. When she's not writing, she's reading, or armchair-quarterbacking her favorite NFL team from the comfort of the family room couch. Julie is a Golden Heart finalist and the author of four contemporary sports romances.

Our heroine, Cameron Ondine, is already late, and she’s about to encounter Zach Anderson for the first time in ten years.

The rush hour traffic of New York City didn’t immediately yield a cab. He moved closer to the curb as a car stopped for him. A flash of hot pink and black appeared in his vision, just before a woman with luxuriant, long blonde hair, great legs, and a nice ass whipped the door open and hurled herself onto the seat inside.
She stole his damn cab!
“Hey,” he shouted. “That’s mine. Get out of my cab!” He reached out to grab the door.
“Too late.” She didn’t look up at him. “Gramercy Tavern, please.”
“No. This is my cab!” He was now running alongside as the guy tried to pull into traffic. The woman in question glanced up, looked shocked for a split-second, and rearranged her features into a glare.
Jesus. It was Cameron Ondine. She’d been avoiding him for ten years now, but she was about to have another encounter with him if she didn’t get the hell out of his cab. He knew he would see her tomorrow morning. He thought he’d have hours to pretend like she didn’t matter. Her suddenly materializing in front of him felt like a punch to the heart.