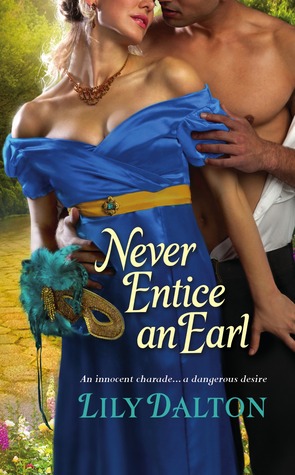 A Deception Most Reckless

Lady Daphne Bevington would do anything for her maid Kate-including masquerading as Kate and sneaking around the wrong side of London to settle the poor girl's debt. Yet her innocent ruse takes a scandalous turn when "Kate" runs into a handsome gentleman on a secret quest of his own. A moment of passion could cost Daphne her reputation, but how can she ignore the stranger's searing kiss?

An Arrangement Most Wicked

Lord Cormack Northmore is determined to find the immoral peer who ruined his sister. So when he learns that the irresistible woman he knows as "Kate" is the Season's most sought-after debutante, Cormack plans to use her connections to help him set a trap. Now, the closer Cormack gets to uncovering the villain who haunts the ton's ballrooms, the more he realizes that the lovely lady is in danger herself. Will he abandon his quest for revenge-or risk losing his one chance at love?

Lily Dalton grew up as an Army brat, moving from place to place. Her first stop after relocating was always the local library, where she could hang out with familiar friends: Books! Lily has an English degree from  Texas   A & M   University and after graduation worked as a legal assistant in the fields of accident reconstruction and litigation. She now lives in  Houston ,  Texas, with her family. When she isn't at work on her next manuscript, she spends her time trying out new recipes, cheering on her favorite Texas football teams and collecting old dishes, vintage linens and other fine "junque" from thrift stores and flea markets.

Excerpt from Never Desire an Earl:
She held his face in her hands, and pressed butterfly soft kisses across his nose and cheeks and eyelids, as he whispered her name. His hands gripped her arms, as if he intended to stop her…but he didn’t.
With a sigh, she explored lower, parting the linen at his throat, and pressing a trail of kisses down the center of his chest. An odd, strangled sound, burst from deep in his throat, one that pleased her.
“Daphne, no.” His entire body quaked. “You’re confused. You just survived a terrifying ordeal.”
“It’s just kissing—”
“No, it’s not just kissing.” He gripped her by the arms, and gave her a solid shake, his gaze burning into hers. He was trying to be noble, which only made her want him more. “You are innocent, and you can’t know what you do to me, with just a kiss. A look. With just a toss of your hair.”
“Cormack, I know what I said at the Monument this afternoon, that I couldn’t go any further, because I wouldn’t be able to let you go when the time came. But tonight, out there under the lanterns, under the stars, I realized that neither can I let you go now.”
“I can’t marry you, and if I can’t marry you, this will not occur.” He shook her again.
“I don’t want you to marry me. I just want to be close to you, whatever that means, even if it’s just for tonight.”
“What are you saying?” His gaze flared with heat.
“That I want you, Cormack,” she said unsteadily, terrified of speaking the words aloud, yet knowing they had to be said. “That I want us, right now. I know what I mean by that. I may be inexperienced, but I’m not misinformed.”
Suddenly he was gone from her arms, and she was left with an empty bench. She twisted round to find him in the distant corner, arms outstretched along the walls and his long legs bent at the knees, staring at her through glassy eyes. “Don’t do this to me.”
He looked so tall, and handsome and tortured that she almost laughed.
“I made the decision never to marry Cormack. That doesn’t mean I intended to die a virgin.”
He closed his eyes and cursed. “You don’t know what you are saying.”
“I know exactly what I’m saying.” She crossed the space between them, sinking between his knees, and closing her hands over his. “One day I fully intend to be everyone’s favorite old maiden aunt, one with a beautiful secret.” She smiled. “Please give me this memory. I want it to be you.”
“Old maiden aunt, my eye,” he answered vehemently, his gaze moving over her face, then lower to her breasts, which rested between his open thighs. Fully aware that her torn gown gaped, she held still, allowing him to take his fill of the view. “You ought to find someone special and marry. This memory you ask for, should belong to him.”
“There’s not going to be a husband. I belong only to me.” She answered fiercely, squeezing his hands. “And I want to share this with you.”
“I’ve no right—”
“But I have every right,” she whispered, running her hands up the tops of his muscled thighs…over his pelvis…and up his rigid stomach, allowing her curiosity to lead her. Feeling the powerful flex and seize of his muscles beneath her palms, her mouth went dry with what she knew to be desire.
He hands came to either side of her face, suddenly and fiercely, his expression a portrait of torment. “Daphne.”


She leapt against him, crying out in pleasure as his arms closed around her. She couldn’t get close enough, and as if he couldn’t either he shoved her skirts up to her hips and brought her legs, bent at the knees, around his waist. With one hand at the center of her buttocks, and the other splayed wide at her back, he seized her against him, and thrust his hips upward and off the seat so fiercely, his cheek turned against her breasts, that she felt the sudden invasion of his arousal into the swollen place between her legs. She moaned, as the most wonderful, but elusive sensation fluttered through her legs, and up her spine. There, everything went hot and damp and needful. Instinctively she tilted her hips, wanting more. As if in answer, he moved, the heels of his boots sliding heavily against the floor of the carriage, replicating the same sensation as before, only this time deeper and more satisfying.
a Rafflecopter giveaway
Posted by Melody May at 5:00 AM