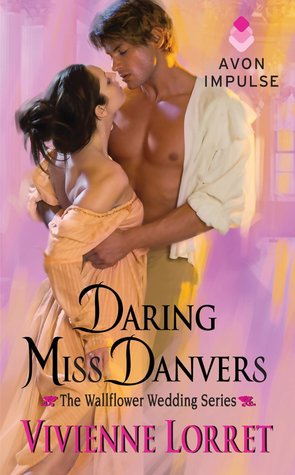 So, I finished Daring Miss Danvers by Vivienne Lorret. Let me just say that fake engagements or fake relationships are one of my favorite tropes. With that said, it follows the same pattern of that particular trope, you know they get engage, force to marry, and find out that they didn't have to. Of course, in the end they both realize that they want to be together. Anyway, that's the gist of the story. What made me like the story:

We have Emma Danvers, who is prim and proper. She's one of those girls who wants to be the perfect example of what a young lady should be. A lot of it steps from her parents, and not the way you would think. Oh no, they are complete opposite of model couple of the ton. Barely hanging on to the outskirts of society, Emma wants to beyond reproach. Next we have Oliver Goswick, Viscount Rathburn. He's trying to make repairs to his family home and trying to build a hospital for burn victims. However, his grandmother, Dowager Duchess of Heathcoat, wants to make sure he's on the straight and narrow path, so to gain his inheritance Oliver has to jump through some hoops. So, he figures Emma would be a good choice for a fake betrothal.

Yes, the story had been done before and I still found enjoyment. One of the things I like about these types the story is when the hero/heroine decided they have falling for the person they are engage to. Honestly like how Emma is so wound up tight that she doesn't know how to loosen up and I don't think she really did till the end. I like Oliver, because he does have a good heart and tried to pull the wool over his grandmother. Of course, grandma was playing both of them fools.

Here's the bottom line: If love fake engagement with little or no conflict, you will enjoy. If you need something light that's not going to stress you out, this is your book. Basically, Daring Miss Danvers is a story of friends that realize they are perfect one another, but needed a little push.