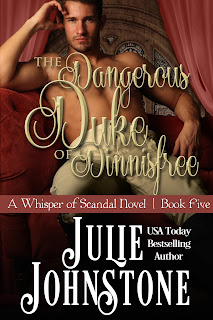 The Dangerous Duke of Dinnisfree

Justin Holleman, the Duke of Dinnisfree, is used to being wanted—in bed, for missions, and even dead. He’s protected his country more times than he can remember, gaining enemies along the way, but he failed to defend himself from the past that hardened his heart. Instead, he became an expert at shutting people out. Yet now, in order to save the king, Justin needs to let go of his old ways and let someone closer to him than ever before. He approaches the mission with his classic cold calculation, but his fiery new ally upends his ordered world and entices him at every turn. Suddenly he’s in danger of compromising his assignment and losing his heart, two things he swore never to do.

Desperate to protect her parents from poverty, among other things, Miss Arabella Carthright unwittingly becomes a pawn in a dangerous political battle when she agrees to aid an enigmatic stranger. Having learned long ago to count only on herself, she’s surprised when time and again the duke actually aids her. But when his true assignment becomes clear, Arabella realizes the man she’s come to care for poses the greatest threat to those she loves.

As Justin and Arabella face their feelings and their web of deception falls away, they must decide how high a price they are willing to pay for love and loyalty.


Arabella looked Justin straight in the eyes. “I’m supposed to seduce you. That’s why I’m here.”
“Well, by all means, then,” he teased, even as desire gripped him in its iron hold.
Her mouth parted, and she stared at him for a long moment. She inhaled slowly, her chest rising tantalizingly. “I’m also supposed to search your home for the letters.”
He cocked an eyebrow. Anger pumped through his veins that she, an innocent, had been drawn into such corruption.
“Justin, I don’t intend to seduce you.”
“How utterly disappointing,” he murmured. He had to take a deep inhalation to try to return his heartbeat to a normal rhythm. If she’d attempted to seduce him at this moment, he would have let her with no hesitation at all. He would have compromised his mission to touch her, kiss her, and hold her in his arms.

Author Info:
Julie Johnstone is a best-selling author of Regency Romance and the author of a new urban fantasy/paranormal romance book. She’s been a voracious reader of books since she was a young girl. Her mother would tell you that as a child Julie had a rich fantasy life made up of many different make believe friends. As an adult, Julie is one of the lucky few who can say she is living the dream by working with her passion of creating worlds from her imagination. When Julie is not writing she is chasing her two precocious children around, cooking, reading or exercising. Julie loves to hear from her readers.
You can send her an email at juliejohnstoneauthor@gmail.com or find her at www.juliejohnstoneauthor.com, or on Facebook at https://www.facebook.com/juliejohnstoneauthor and www.facebook.com/authorjuliejohnstone and on twitter at @juliejohnstone. You can join Julie’s newsletter here: http://juliejohnstoneauthor.com/extras/subscribe/

If you would like a chance to win a copy of Julie's latest release, please leave a comment about anything. Don't forget a way for me to contact you.
Posted by Melody May at 8:00 AM