The first book in a new historical romance series, A REBEL IN JERICHO, is a suspenseful Wild West adventure with an abduction, border battles and Mexican saloons! Check out this novel from debut author Mimi Milan where two people learn that love, courage and faith are all they need to face the trials of the West.

To learn more about Mimi Milan check out her website! 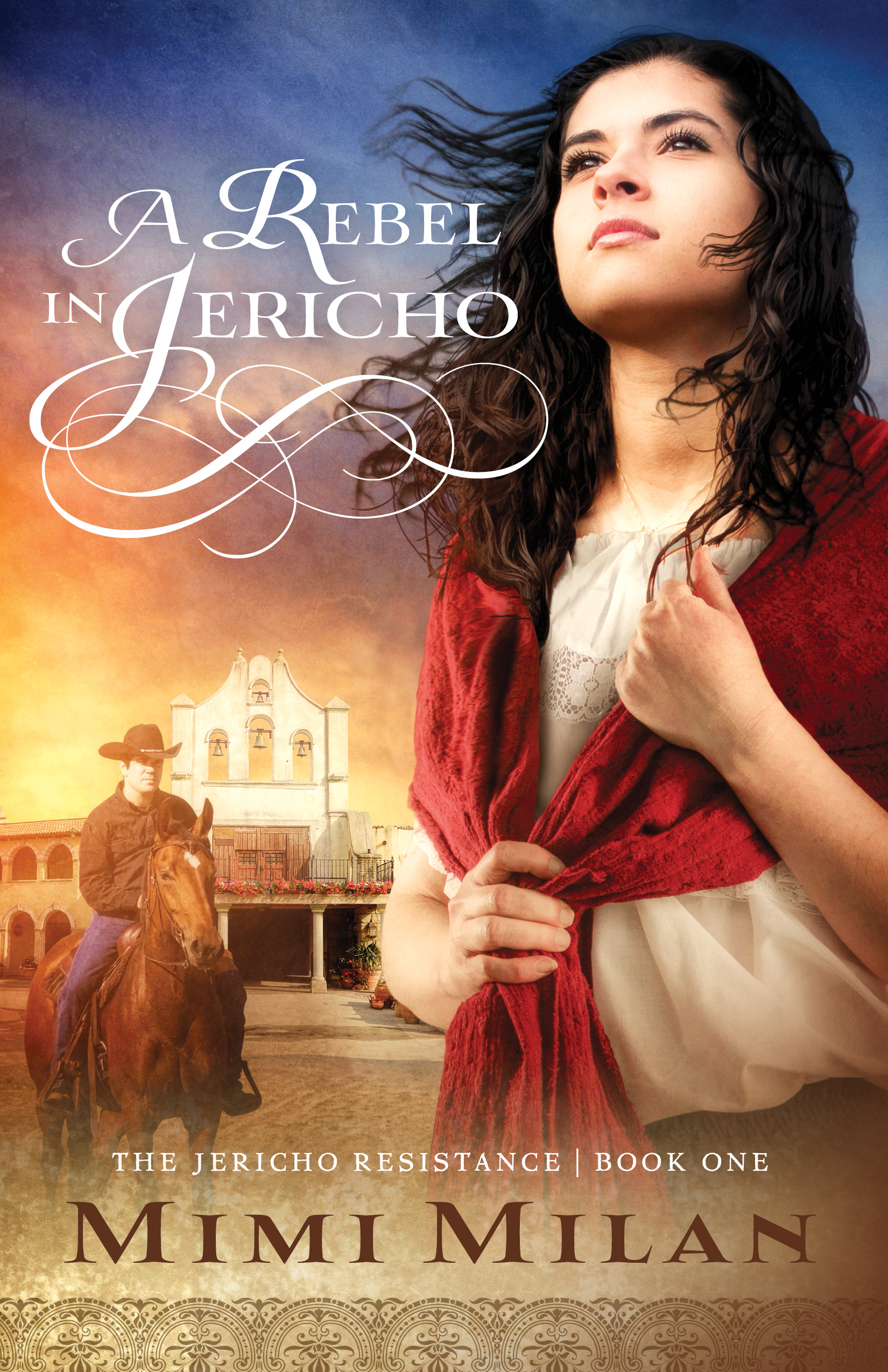 About A REBAL IN JERICHO
After years of preparing for marriage, Catalina Santé is interested in little more than making a good match. And why not? She’s young, beautiful, educated… everything a wealthy man should want. However, a tragic accident will leave her with less than a marriage proposal—she’s fighting for her very life!
Matthew Martin spends most of his time just trying to fit into American society. It’s one of the reasons he became a deputy. Willing to risk it all in order to protect Catalina, he can’t imagine what that entails… until she’s abducted and sold to a Mexican saloon, where a border battle rages between two towns.
Can love and faith survive in such a harsh place? Will Matthew even be able to save Catalina?

“A penny for your thoughts?” Catalina regretted asking almost as soon as the words were out. The less she knew about him, the better. Right?   Continuing to lean against the side, Matthew gave her a once-over.   He decided to have a little fun with her.
“Only a penny? Is that what people are charging nowadays? Not me. My thoughts are worth a whole nickel.” The laughter in his tone danced in his playful eyes, their brilliance shining like blue gems. A slow, infectious grin spread across Matthew’s face. He looked like a mischievous little boy who was trying to buy his way out of trouble after being caught with his hand in the cookie jar.
Catalina bit her lip in a desperate attempt to remain serious, but it was of little use.
Charmed by her softened features, Matthew took a slow step towards her. He raised a tentative hand and pushed back a curl that had worked its way loose.
Catalina’s breath stilled as the light touch of his fingers slowly trailed along her cheek. Her beautiful eyes and full mouth were almost irresistible, and he wondered if she tasted as sweet as she looked.
Unasked questions blazed from his eyes, making the cage that she was trying to construct around her heart unhinge. The sudden attraction hit her hard. She forced herself to look away and break the spell. Falling for her escort was not part of the plan.
“Look!” Catalina pointed towards the bank. “We’re just about there.”
“Then I guess we best get back to the car.” Disappointment laced his words. She didn’t have any romantic notions about him, so he best leave it at just friends.
No more goo-goo eyes.
“It shouldn’t take too long to get it started.” He picked up the conversation again as he paced back to the car with a determined step. “It’s warm out. So she doesn’t need to be cranked or anything.” Catalina questioned his sudden change in mood. She was grateful at the flow of normal conversation between them. Still, it felt like something was suddenly missing. “Well, I suppose that’s a good thing.” She plodded along behind him, dissatisfied when they reached the Model T. He took her hand and helped her up and into the front seat. “Shouldn’t I ride in the—”
“You’ll get a better view of things while we’re driving from up here.” He cut her off, patting the hood of the car for emphasis – a friendly grin that promised an exciting ride. After all, it was a long trip to Nogales. “Besides, it’ll be more fun.”
More fun? Hmmm...more trouble maybe. Definitely more dangerous.


Add A REBEL IN JERICHO to your TBR pile on Goodreads!

On Sale in Digital Now:
Amazon

See what other readers are saying about A REBEL IN JERICHO:
“Romance, intrigue and danger! It’s an exciting adventure as the reader joins Catalina on her perilous journey through the underbelly of Mexico’s dark side.” – Patricia Highton
“A delightful blend of drama, romance, and self-discovery.” – Tiffany Matus

Mimi Milan spent two decades scribbling away in notebooks before realizing that her life’s calling was to write. So she returned from Mexico and attended the University of North Carolina at Charlotte, majoring in Creative Writing and minoring in Film. She currently resides in the suburbs of Charlotte, making time for God, family and imaginary friends.
Connect with Mimi: Website | Facebook | Twitter | Goodreads | Amazon