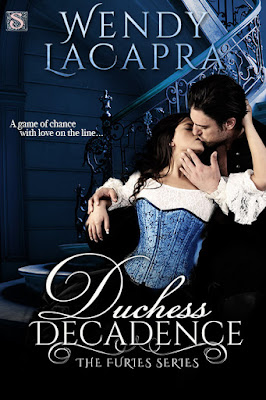 Thea Worthington, Duchess of Wynchester divides her time between social engagements and playing her luck against fickle fortune. Yet every gamble is only a bluff—a means to hide from the pain deep within her, and the loss of a babe she never held in her arms. Now Thea's luck is about to run out. Her estranged husband has returned and seeks a reunion...

Plagued with guilt over what happened to his wife three years ago, the Duke of Wynchester has kept his distance. The duke is resolved to piece his family back together, especially now that he's discovered his beloved brother—long thought dead—still lives. But Thea's lovely, porcelain facade is on the verge of cracking...spurred on by the duke's brother's secretive, malevolent animosity.

With everything riding on her future, Thea plays a daring game of chance for love and her marriage...and this time, the dice are most certainly rigged.

My Thoughts:
We all know there are some series where you can pick up in a middle of series and you would be fine, well this isn't one of them. Truth be told, you are going to need to read the first books. I have read the first one, I haven't gotten the second one yet. Anyway, each of the stories build upon one another, so there is valuable information.

We have been building for the return of Wyn and Thea Marie's reunion. *Spoiler if you haven't read the previous books* Thea wasn't planing on returning anytime soon, but circumstances arrises she needs to return to Wynchester to protect him from his evil brother. Thea return was a last resort, because the other Furies have been trying to fix situation so Thea didn't have to return. Now we have a reunion. To bad it's a bit rough sailing for these two. The past plays a huge part into their separation, actually Thea abandons the marriage, because she didn't feel Wyn was there for her. Emotions running high, and that can happen after a miscarriage. Seriously, crazy crap can happen when a miscarriage happen, and I won't bore you with the details (a topic for another time or maybe not who knows). Basically, Thea has to decide if she wants to reconcile with her husband. During this time Wyn is trying everything to win his heart favor, and it's not the easiest thing to do. They are also discovery each other likes during this time. I have to say that Wyn's actions are sweet, and he showed that he truly cared for his wife.

Overall, I enjoyed Duchess Decadence. I did like that the reunion and the growth of Wyn and Thea Marie, because they had growing to do. I believe Wendy did a marvelous job on her villain, and he definitely was diabolical. So, if the Duchess Decadence appeals, don't forget to get the first two books so the can enjoyed to the full extent.

Excerpt from The Duchess of Decadence:

She tugged at the edges of her gloves and laced her spine with steel. She had known returning to the duke was not going to be easy.
Wynchester cast a sideways glance. “Are you steady?” “Quite.” She shined her enameled smile. I can do this.
“Tonight,” he said low, “we must show unity—the Worthington family, as one.”
“You’ve made your wishes,” her eyes flashed, “and your priorities, clear.”
“Good,” his response was clipped. His gaze searched hers for an extended breath. He lowered his voice. “If you had spoken to Eustace the way he spoke to you, I would have answered in the same way.”
Her enameled smile turned brittle. “You are very talented at lecture.”
“At the very least,” anger flashed across his features, “you have acknowledged my talent for something.”
“Many things.” She put up her gloved fingers one by one. “Set-downs, cuts direct, efficient marshalling of your sycophants…”
He frowned. Then, his anger melted away into an ironic smirk. “At least I can coerce someone to listen to direction.”
She squinted. “I am not a sycophant.”
“No.” He made a leg—a brief bow that mocked more than it paid tribute. “My non-sycophant, duchess, I ask of you a boon.”
Despite herself she nodded.
“Be good, Thea Marie.” His eyes held no command— just uncertain apprehension. “Please.”
Please was not something one heard often from a Worthington. Her anger transformed into another, just as visceral response: challenge. She decided she’d like very much to hear him say please again. Her gaze traveled over his face and then followed the line of his jacket to his breeches.
His finely fitted breeches.
Yes. Another please would be more than acceptable.
“Ah, Wyn.” She reached up and cupped the hard angle of his ever-so-perfectly shaved cheek. “I will behave…” she made her voice low and husky and leaned forward, “if that is what you really wish.”
Wynchester’s eyes grew entirely black. She sent him a warm smile, and then turned. As she walked away toward the solace promised by the Furies, she felt his gaze on her back with every step.
She’d always had a penchant to notice little things. Like the way Wynchester’s eyes grew dark when surprise cut through his armor. Odd such perception should quell her anger and save her tonight. When she was small, it had been her downfall.
Grandmother, there are small clouds trapped in the diamonds on your bracelet. Is that why you have to sell it? There’d been clouds in her grandmother’s eyes, too, as she responded. Silly child. Sit down.
Since then, she’d kept most of her insights to herself.
Her gaze flicked to the far corner and she noticed Eustace’s smile. It enveloped his cheeks and wrinkled his forehead, but his eyes remained largely unaffected, like the eyes of someone far away. Those eyes turned on her and a chill passed through her veins.
She held his gaze for a moment, sending her own silent message.
I will protect Wynchester at all cost.
Eustace gave her a mocking bow.
Challenge.

Wendy LaCapra has been reading romance since she sneaked into the adult section at the library and discovered Victoria Holt & Jane Aiken Hodge.  From that point on, she dreamed of creating fictional worlds with as much richness, intrigue and passion as she found within those books. Her stories have placed in several contests, including the 2012 Golden Heart®. She lives in NYC with her husband and loves to hear from readers.

7 Winners – Will win an eBook copy of ONE of the following books from the ladies from www.PastThrills.com:
The Accidental Duchess, by Madeline Hunter
Secrets for Seducing a Royal Bodyguard, by Vanessa Kelly
Good Earl Gone Bad, by Manda Collins
The Dukes Daring Debutante, by Ann Lethbridge
The Love List, by Deb Marlowe
I Spy a Duke, by Erica Monroe
Reckless Wager + Bonus Novella Wanton Wager, by Christy Carlyle