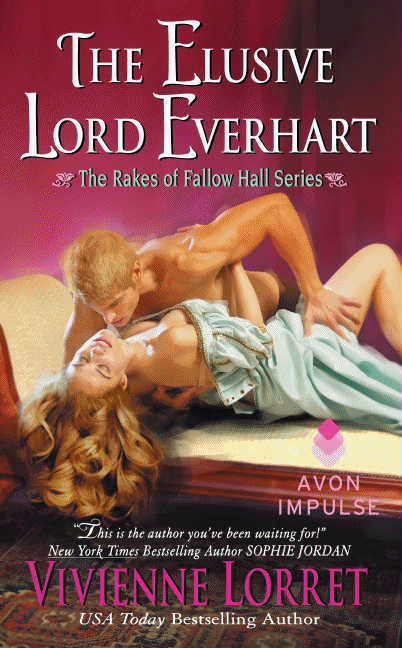 All right, I got a chance to read Vivienne Lorret's The Elusive Lord Everhart. Oh man, I don't know where to begin with this story, because it was sure entertaining.

First off, we have Calliope Croft and she's firmly on the shelf after receiving a love letter from Casanova. She fell in love with the words that she didn't seek out anyone else. Unfortunately, nothing ever came to fruition, which now she's destined to be an old maid. She's a bit odd, so that doesn't help her cause. I don't mean odd in a bad way, but more like a dreamer. A great way to describe her is she always has her head in the clouds. However, she decides she's going to find out who Casanova and seek out revenge for being put on the shelf. Now Gabriel was a bit full of himself when he wrote those letters, and he figures that he has nothing to worry. He feels that won't see Calliope and can keep his feelings hidden. Funny how fate plays a roll in shaking things up. So, he has to decide if he wants to bury his feelings for Calliope or make a go with her.

I love stories that contain a bet on who's going to end up leg-shackled. In the long run they all get marry by the end, and it's fun to see them fall one-by-one. What makes this a fun story is the cast of characters. Especially, the guys and how they egg one another. However, there was one character that kind of drove me nuts, and it was Calliope's cousin Pamela. She does serve a purpose, even though she's a self center selfish person. Overall, The Elusive Lord  Everhart is an entertaining read and I can't wait to see who is the next to bit the dust.