Good morning everyone! Today is a fun day! I was able to ask Anna Campbell The Top 5 Places Where Your Heroes would Like to Have a Tryst? So, I'm going to let Anna take over:

So here’s the top 5 places where my heroes like to have a tryst:

1.     If anyone’s read my books, you know there’s nearly ALWAYS a nookie/nearly nookie scene in the library. What can I say? I like big bookshelves and I cannot lie! And aristocratic libraries are full of all sorts of wonderful furniture like chaises-longues and library tables and ladders that get the imagination (and the characters!) going.

3.     The bedroom suite in the stately home. What’s not to love about four posters and fireplaces and elaborate furniture? There’s always plenty of room for discarding one’s clothing in the bedrooms in my books!

4.     An upmarket set of rooms in an inn. I’ve used this one a few times, sometimes because my hero and heroine are travelling after their wedding and sometimes because they’re desperate to escape London’s prying eyes.

5.     A luxurious love nest in Derbyshire. This might just be where James Fairbrother, Marquess of Leath, arranges a tryst with the woman he finds so terrifically tempting. Nell Trim is technically a servant in his house so for the sake of her reputation, he whisks her away to a secret hideaway cottage in the wildly beautiful Peak District.

So my question today is – which of these five would you choose for a tryst with your hero? 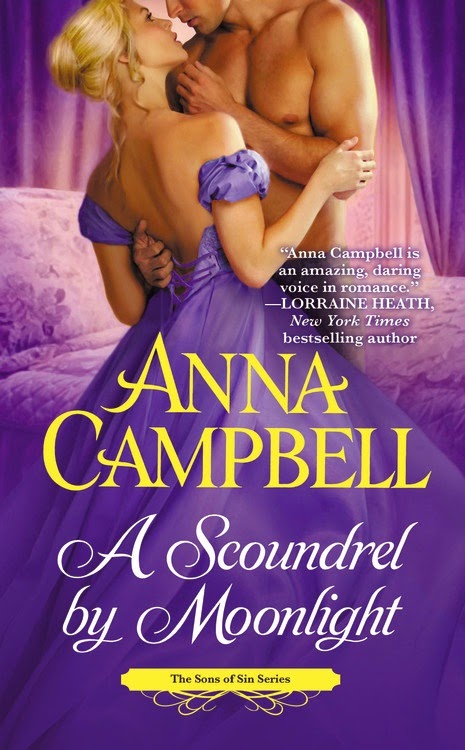 About A SCOUNDREL BY MOONLIGHT

Anything can happen in the moonlight . . .

Justice. That's all Nell Trim wants-for her sister and for the countless other young women the Marquess of Leath has ruined with his wildly seductive ways. Now she has a bold plan to take him down . . . as long as she can resist the scoundrel's temptations herself.
From the moment Nell meets James Fairbrother, the air positively sizzles. Yet for all his size and power, there's something amazingly tender in his touch. Could he really be such a depraved rogue? The only way to find out is to beat the devil at his own game . . . one tempting kiss at a time.

Always a voracious reader, ANNA CAMPBELL decided when she was a child that she wanted to be a writer. Once she discovered the wonderful world of romance novels, she knew exactly what she wanted to write. Anna has won numerous awards for her Avon historical romances including Romantic TimesReviewers Choice, the Booksellers Best, the Golden Quill, the Heart of Excellence, the Aspen Gold and the Australian Romance Readers Association's most popular historical romance (twice). Her books have twice been nominated for Romance Writers of America's prestigious RITA Award and twice for Australia's Romantic Book of the Year.

When she's not writing passionate, intense stories featuring gorgeous Regency heroes and the women who are their destiny, Anna loves to travel, especially in the United Kingdom, and listen to all kinds of music. She lives near the sea on the east coast of Australia, where she's losing her battle with an overgrown subtropical garden.

a Rafflecopter giveaway
Posted by Melody May at 6:33 AM