The Duke of Andelot
School of Gallantry, #7
Delilah Marvelle
April 10, 2015 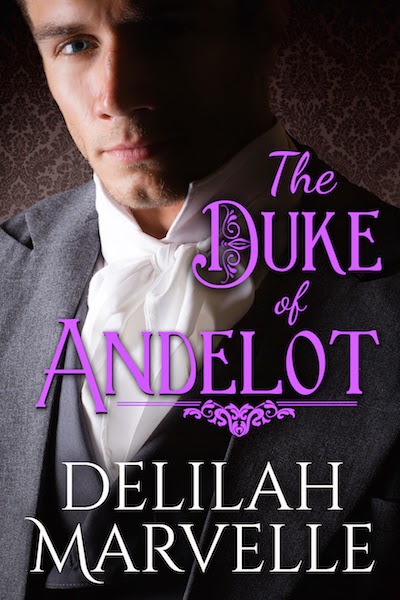 ABOUT THE DUKE OF ANDELOT:

For fans of Tom Jones and The Scarlet Pimpernel comes a twisted, sexy tale that takes the French Revolution to smoldering new heights.

Long before becoming the flamboyant courtesan known to men as Madame de Maitenon, Thérèse Angelique Bouchard, dreamed of becoming an actress capable of commanding not only the stage but all of Paris. Until she meets an extraordinary aristocratic gentleman who sweeps her into his arms and the danger of his life, while offering her the sort of wealth she never imagined. What starts off as a seductive alliance, ends in her giving him the one thing she cannot afford: her love.

After the murder of his older brothers, Gérard Antoine Tolbert, becomes the last heir to the powerful dukedom of Andelot, leaving him to fight for not only his life, but the allegiance he holds for the crown. During the final rise of the French Revolution that whispers of the violent change about to shake the entire country, Gérard

meets an aspiring actress who introduces him into wanting more out of himself and life. In trying to protect her from their overly passionate alliance and those that want him dead, he must decide what matters most: his life or his heart.

AUTHOR NOTE: This sweeping saga will follow Madame de Maitenon and the Duc of Andelot from their youth in 1792, France, to what they ultimately become when the School of Gallantry series first starts in England, 1830.

Excerpt from The Duke of Andelot:


His aloofness showed on his face. “I have a conscience, ma biche, so permit me to give you some advice.” Ignoring the basket she still held up, he rigidly leaned down toward her from within the saddle and rumbled out, “Go home. Paris does not need another penniless country girl trying to get famous. You will only end up whoring yourself out of desperation once you realize the stage pays nothing. Is that what you want? Because that is what awaits you. Acting, whoring, the pox, blaming everyone for your demise, followed by a quick death. If you are fortunate enough to die quick, that is.”
He was clearly not an optimist.
She gave him a withering look, lowering her basket. “I have much bigger plans and I can assure you, they do not include whoring myself to a man. If I wanted to do that, I could have easily stayed in Giverny. And whilst, yes, I often barter with men for whatever I need, my stage career comes first. I intend to be the next Mademoiselle Raucourt.”
“I certainly hope not. That woman is a whore. And not a very nice one at that.”
She glared. “How dare you insult the greatest actress in all of France?”
He lifted a brow. “How the hell do you think she became great?”
She gasped. “I am not about to listen to your vile gossip. I happen to like her. Ambition amongst females should be trumpeted not slapped.” Swinging away, she adjusted the heavy basket, wishing she hadn’t picked so many apples and trudged onward. “I will find my own way to Paris, merci. Whore myself, indeed. I have yet to find a man worthy of it. All you apes ever think about is food, wine and poom-poom.”
He paused from adjusting his felt hat. “What the devil are you talking about?”
Why did no one ever get it? “Sex. It sounds exactly what it looks like. Poom-poom.”
A cough escaped him. “Are you saying you have done such things?”
She rolled her eyes. “No. I have ten brothers under the age of eighteen. The eldest of them, at seventeen, is already engaged to one of the girls in the village due to his inability to control the stick between his now hairy legs. I caught Benoit with his bare arse in the air, grunting like the pig that he is. Not a pretty sight. Whilst my parents? Those two lusty little rabbits have made their bed squeak so much over the years, there are visible grooves in the wood floor that will soon take them and the entire bed to China.”
A laugh, low and deep and well-amused, escaped him. “I uh…thank you. I needed that. I have not laughed in…a long time.” He slowly trotted his horse after her and eyed her, amusement lighting his eyes. “I wish to be of assistance, my dear. Whatever you need, it is yours. How can I help?”
Oh, now he cared.

The Duke of Andelot ©2015 Delilah Marvelle

Other Books in the Series:

GOODREADS GIVEAWAY:
Delilah is also giving away 25 copies of THE DUKE OF ANDELOT on Goodreads. Open to US, CA, AU and GB. Ends May 1st. 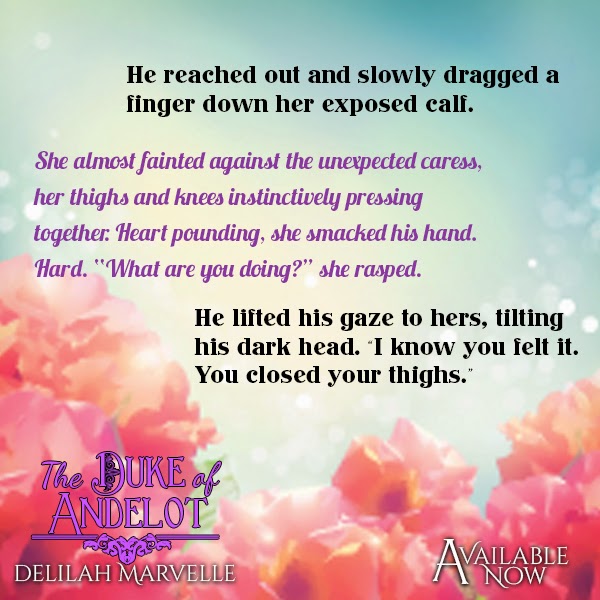 USA TODAY Bestselling Author Delilah Marvelle is the winner of the Reviewer's Choice for Best Sensual Historical Romance of the Year and had Booklist name her historical romance 'Forever and a Day' one of the TOP 10 Romances of the year. When she isn't writing, she's digging through inappropriate research books that include anything in history having to do with courtesans, brothels, sexual contraptions that were never properly used and other fascinating forms of dirty history that never made it into college textbooks. You can visit her at her website at www.DelilahMarvelle.com