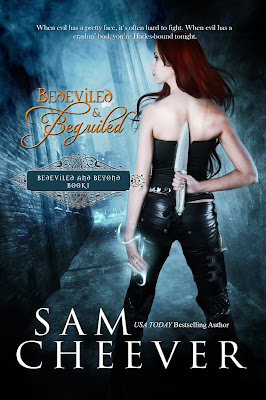 Astra Q Phelps is on the side of the good guys in the war between good and evil. Unfortunately for her, the bad guys have been making inroads on her soul. And when a particularly dark and sexy dark worlder fixes his heated gaze on Astra, the lighter side of her nature quickly finds itself kicked to the curb by her slut-monkey side. But Astra doesn’t have time to deal with her love life. She’s in the middle of a war between two dark factions…a war that just might mean the end of the human population…and it seems the fate of the world rests uneasily on her shoulders. It’s a lot of pressure to put on one feisty halfling…but Astra Q Phelps is definitely…erm…certainly…ahh…possibly up to the challenge.

Author Bio:
USA Today Bestselling Author Sam Cheever writes romantic paranormal/fantasy and mystery/suspense, creating stories that celebrate the joy of love in all its forms. Known for writing great characters, snappy dialogue, and unique and exhilarating stories, Sam is the award-winning author of 50+ books and has been writing for over a decade under several noms de plume.
If you haven't already connected, Sam would love it if you Liked/Followed her wherever you enjoy hanging out online. Here are her online haunts: