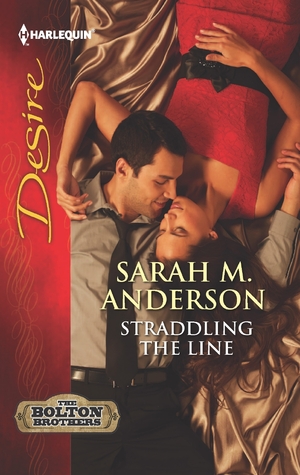 Basically I spent most of my day reading Straddling the Line by Sarah M. Anderson. It was suggested to me that I should read The Bolton Brothers books in order.

The first book is Straddling the Line, which features Ben Bolton. Now Ben is the financial wiz of the brothers, but his father doesn't really see this as an asset. It probably doesn't help that Ben is the middle child. However, he doesn't play the middle child card, which he could. No, Ben tries to be the peacekeeper and keep the family together. How sweet. Then his life gets turn upside down by Josey White Plume. Now Josey doesn't quite fit in. She's half Lakota Indian and caucasian. It's hard being half, because sometimes you just don't fit in with either group. So, she finds a hard time balancing both her heritage.

I really liked Josey. I mean it took some balls to go after what she really wanted for the school. She was able to manage to get Ben and his family to donate to the school on the reservation. Now Ben is this sexy CFO who plays in a band tries to get the girl that doesn't quite fall at his feet. One the reason Josey doesn't fall to Ben's feet has to deal with a past relationship. One guy couldn't handle that she was too native american. Personally, the guy was a douche to go after Josey.

In Straddling the Line, we see Josey and Ben dealing with insecurity. Ben wondering if Josey is just going out with him, because he help with the school or himself. Josey with her insecurity that no one will really love her for who she really is. I actually enjoyed the story. I can't wait to read the rest of the Bolton Brothers. So, if you are looking for new read, you might want to try Straddling the Line. It won't take you too long to read.

Copy provided by the author