Seducing the Enemy by Noelle Adams 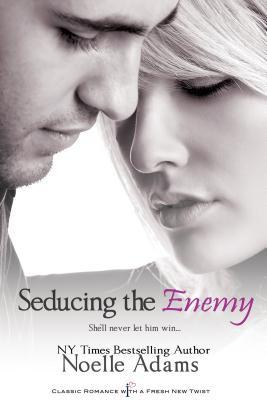 I pretty much just finished Seducing the Enemy by Noelle Adams. All right the first thing that caught my eye was the title. Anytime you throw in a form of seduce and enemy it becomes a must read. Main reason, I have to know why they are using the word seducing and enemy in the same phrase.

Quick background: The Edwards and Damon have been in disagreement on what happen about 15 years ago. Think of it as a modern day Hatfield and McCoy situation. Anyway, the night before the negotiations Marietta and Harrison had relations. Neither one of them knew that were embroil in a situation until they met the next morning and things turned a bit ugly. Hurtful things were said and negotiations were off the table before they really started.

I thought Seducing the Enemy was pretty amazing. In the story we find Marietta trying to fix the situation and move on in her life. However, she feels the best way is talk to the Uncle face to face. Yet she gets stonedwalled by Harrison, because he believes nothing a gold-digger. It's not Harrison's fault that he can't trust women. I mean in his experience he was hungout to dry by the last woman, so can't really blame the guy for being cautions. On the same token, treating every woman like they are all conniving deceitful evil people when not every woman is a bit harsh. Yet, experience will dictate how you will handle situations.

Basically you have a young woman who went against the odds to become whole again doing battle against a bitter man who believes woman are nothing but gold-diggers. I love how we have enemies that slowly become friends that could be possibly be lovers. However, the past still lingers and might cause disharmony.

I found myself not wanting to put down Seducing the Enemy. Overall, I found the story captivating and intriguing. Who doesn't love a stubborn man? Maybe not in real life, but in a book all right. So, if you are looking for an amazing read, you might want to try Seducing the Enemy.