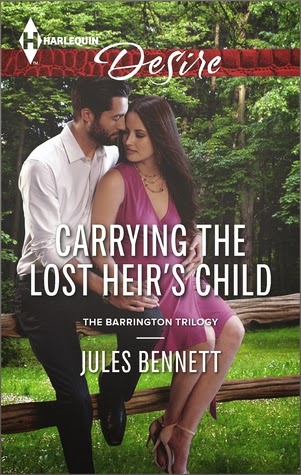 We have finally come to the conclusion of the Barrington Trilogy. It has been enjoyable from the first book, but now we have to come to find out who Nash. When I started the trilogy the first thing that popped in my mind when I was reading When Opposites Attract... watch Nash be related to the Barringtons. The next thought was he's probably the secret love child of Damon and the housekeeper. Okay, I was way off on that one, but he's related to Damon.

Anyway, Nash has been plotting to see if he could get a horse from Damon. He's been trying to get this horse for sometime, but under a different name. Damon and Nash have been rivals for sometime, but didn't know they were related. Isn't that a kicker. Everything is going according to plan until Lily drops the pregnancy bombshell, and Nash slowly develops a conscious.

Okay, I wasn't expecting to get emotionally involved with Carrying the Lost Heir's Child. At first, you see Nash trying to figure out to keep everything together without revealing too much. He wasn't expecting to fall hard for Lily, so the lying to her has been eating at him; for good reason too. Lily enter the affair with Nash for fun and never expected to lose her heart to him. Plus, she doesn't know all the secrets he's keeping. One of the complications they run into is she's not impress with rich powerful men and liars. Yeah, complication. So, it was neat to see these characters draw closer to one another, then falling apart all at once.

Overall, I enjoyed Carrying the Lost Heir's Child, because it brings a family closer to one another. It brings bitter rivals to working together. Last but not least, it brings two people together to find a happiness they might have missed. Plus, a nice conclusion to the trilogy.

Copy provided by author.
Posted by Melody May at 11:22 PM