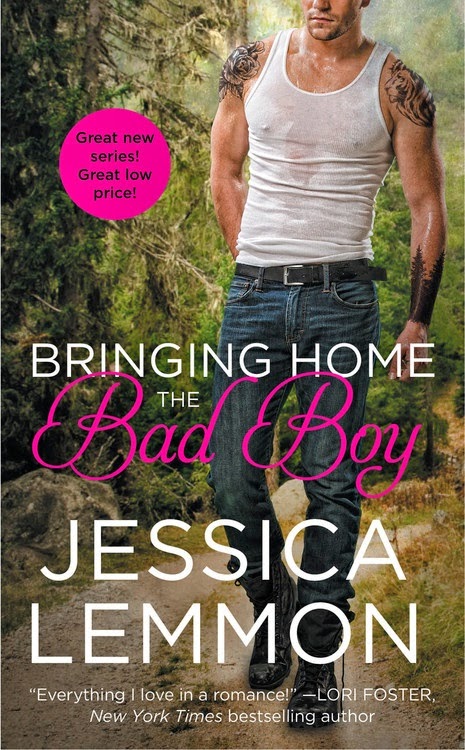 About BRINGING HOME THE BAD BOY:
Creativity is his drug, painting is his escape, but she'll be the addiction that brings him to his knees.

Evan Downey buried a part of his soul when put the love of his life in the ground. He knows he needs to get his shit together for the sake of their son, but escaping into his art is the only way he can begin to cope with Rae's death. When the chance to move back to Evergreen Cove, one of the few places that has ever felt right to him, he knows it's a chance he has to take. For his sake, and his sons.

Charlotte Harris would give anything to have her best friend back. But if she can't have Rae, then she vows she'll at least be there to support the family Rae left behind. So when she learns that Evan is looking to move home, she does everything she can to help him and Lyon re-build their lives at the Cove. But when sparks start to fly between Charlotte and Evan it's the first glimpse of something bright and beautiful either of them has seen in far too long. And they start to wonder if fate has offered them a second chance at happiness-- if only their brave enough to take the risk and let love back into their lives.


Ever since The Millionaire Affair I have been waiting for Evan's story, cause that was when we saw Evan at his lowest point. He had just lost his mother and shortly afterwards his wife. Truth be told he was barely hanging on by a thread. By the time, we reached the end of Millionaire Affair, we saw Evan coming back to life. Don't worry, if you haven't read that book, you will survive, but I wanted to share why I was excited for Evan's story.

So, we jumped ahead to Bringing Home the Bad Boy, and we see Evan trying to start anew. Not only that he starts to see Charlie in a new light too. Evan and Charlie have always been friends, but their common thread was Rae. Even though Rae is gone, her presence is always there there thanks to Charlie. Now Charlie has always had a crush on Evan, but kept that to herself after all Evan was Rae's. As Charlie and Evan draw closer together, Charlie is feeling like she's stepping on a dead woman's toes, and we see the guilt Charlie is carrying. You see Charlie's guilt through most of the book, and some might get a bit weary of her guilt. Hey, it's a natural thing.

Anyway, I actually enjoyed the chemistry between Evan and Charlie. Boy there is some hot scenes, and I think my favorite is a painting scene. Puts a whole new perspective on finger painting. Besides the painting, you see Charlie work through her grief and pain with the help of Evan. Overall, I laughed and yes cried. However, the tears didn't really come till I got closer to the end. Now that was cramming a lot of emotions into one area. I think Jessica did a beautiful job with Evan's story, because he was able to overcome his grief and find another chance at love. So, Bringing Home the Bad Boy is a story of finding happiness again. Basically, if you are looking for one hot alpha who is going do anything to capture a reluctant lady, you might want to add this to your list.

Jessica Lemmon has always been a dreamer. At some point, she decided head-in-the-clouds thinking was childish, went out, and got herself a job . . . and then she got another one because that one was lousy. And when that one stopped being fulfilling, she went out and got another . . . and another. Soon it became apparent she'd only be truly happy doing what she loved. And since "eating potato chips" isn't a viable career, she opted to become a writer. With fire in her heart, she dusted off a book she'd started years prior, finished it, and submitted it. It may have been the worst book ever, but it didn't stop her from writing another one. Now she has several books finished, several more started, and even more marinating in her brain (which currently resides in the clouds, thankyouverymuch), and she couldn't be happier. She firmly believes God gifts us with talents for a purpose, and with His help, you can create the life you want. (While eating potato chips.)