Pretender to the Throne by Maisey Yates 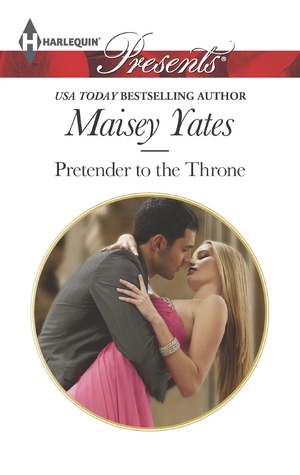 If you are looking for a story that will have you needed a box of tissue, I would suggest Maisey Yates new release Pretender to the Throne. This is the third installment to The Call of Duty series. However, this can be read as a stand alone, because the story focus on Xander Drakros and Layna Xenakos.

Fifteen years early Layna and Xander were about to get married, but everything changed when Xander decided to up and leave. By doing this he change the course of himself and Layna. Now he has decided to return and pickup where he left off. I don't know where gets these ideas, but they never go according to plan.

So, he goes in search of Layna at a convent of all places. Of course the girl he remembers wouldn't be in a convent on the verge of taking her vows. So, his master plans are a bit up in the air, but he feels he needs Layna. She's the key to helping him getting his life back on track.

Yes, I could have used some tissues. I mean you look at Layna who use to beautiful and now has scars on half her face. Then you have Xander who is honest about what he thinks about her appearance, and you wonder if she has a the strength to go forth with the plan. However, Xander overcomes his shallowness and sees Layna as a beautiful person. Now he needs to prove her that he will standby her. Layna has those lingering fears that one day he will up and leave her again. Will she be able to withstand the lost again? An emotional read with to character who are scarred inside and out. Honestly, I found Pretender to the Throne to be an amazing read. So, you are looking for that emotional quick read, you might want to checkout Pretender to the Throne.