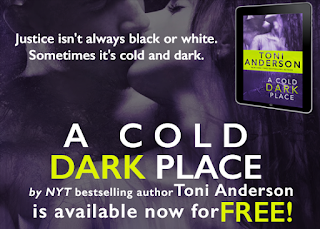 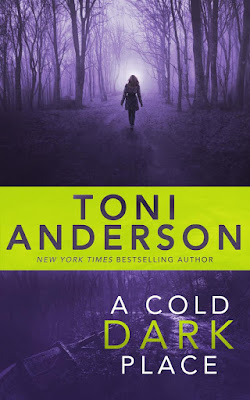 Former CIA assassin Alex Parker works for The Gateway Project, a clandestine government organization hell-bent on taking out serial killers and pedophiles before they enter the justice system. Alex doesn't enjoy killing, but he's damn good at it. He's good at dodging the law, too--until a beautiful rookie agent has him wondering what it might be like to get caught.

FBI Special Agent Mallory Rooney has spent years hunting the lowlife who abducted her identical twin sister eighteen years ago. Now, during an on-going serial killer investigation, Mallory begins to suspect there's a vigilante operating outside the law. She has no choice but to take him down, because murder isn't justice. Is it?
Sometimes it's cold and dark.

When Mallory starts asking questions, The Gateway Project management starts to sweat, and orders Alex to watch her. As soon as they meet, the two begin to fall in love. But the lies and betrayals that define Alex's life threaten to destroy them both--especially when the man who stole her sister all those years ago makes Mallory his next target, and Alex must reveal his true identity to save the woman he loves.

I have been sitting on A Cold Dark Place for about a week, and it was an okay read. There were somethings a I liked about the story, and other things not so much. First off, I liked that it was in audio for, which my life so much easier. Two, I really liked Alex Parker. Even though he was in the gray area he still had his morals. I mention that this was an audiobook, so I have to mention the narrator, Eric G. Dove, he did a pretty good job reading this title.

In A Cold Dark Place we meet FBI agent Mallory Rooney, who happens to stumble upon a vigilante murder. In her spare time she's trying to find the vigilante while trying to solve a case. Yet, Alex is trying to keep his secret from her and protect her at the same time. Sounds like things are about to get complicated.

A Cold Dark Place wasn't a bad read/listen. There were some parts that I enjoyed a lot and others that were okay. The writing was decent, so I didn't have any real complaints. However, I wish there was a little more suspense instead of sex scenes. Don't get me wrong I don't mind those, but I kind of felt a little overwhelm that they landed in bed a lot while trying to catch a murder. The bad guy was pretty low key which is kind of hard to amp up the suspense. Like I said, I liked Alex a lot. He seemed level headed, but that could be for the fact that he was an assassin. You gotta keep a level head on during a mission. Anyway, Mallory. She wasn't bad, but she wasn't great. Towards the end I wanted smack her across the head, because she was playing dumb. There were times I had to stop the story, and try not to chuck my phone. She got a little irrational towards the end. However, things work out in the end. I wish the author dove a little more into Payton, who happens to be Mallory's twin sister. I think this would explain a lot more of Mallory's actions.

Overall, A Cold Dark Place wasn't a bad read. It peaked my interest to the other FBI agents Mallory was working. I might try another book to see if this the series will work for me. Plus, it's a first book in the series, and sometimes they are little rougher. You gotta work out the kinks.

Copy provided by Audiblebooks via InkSlinger 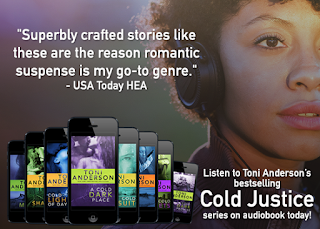 New York Times and USA Today international bestselling author, Toni Anderson, writes dark, gritty Romantic Suspense novels that have hit #1 in Barnes & Noble's Nook store, the Top 10 in Amazon and Kobo stores, and the Top 50 in iBooks. Her novels have won many awards. A former Marine Biologist from Britain, she inexplicably ended up in the geographical center of North America, about as far from the ocean as it is possible to get. She now lives in the Canadian prairies with her Irish husband and two children and spends most of her time complaining about the weather.

Toni has no explanation for her oft-times dark imagination, and only hopes the romance makes up for it. She's addicted to reading, dogs, tea, and chocolate.

If you want to know when Toni's next book will be out, visit her website (http://www.toniandersonauthor.com) and sign up for her newsletter. If you want to read other fascinating stories about life in a city that, during winter, is sometimes colder than Mars, friend her on Facebook: (https://www.facebook.com/toniannanderson).